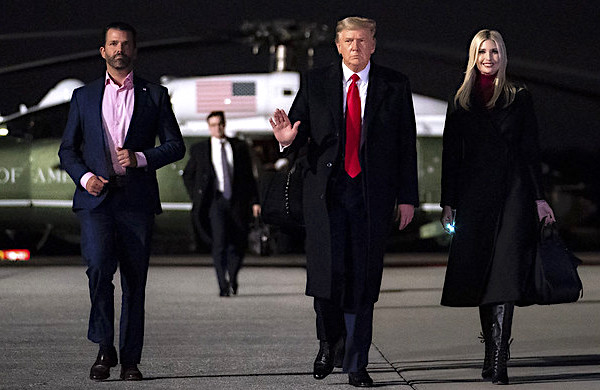 Voting all of a sudden has become a fighting word in the United States.

The 2020 presidential election was undoubtedly influenced by state officials who, without constitutional authority, changed state laws regarding ballots and voting.

That, among other issues, has prompted many to question the accuracy of the election.

Which has prompted Republicans to propose voter integrity advances across the nation and Democrats, almost as a single voice, to oppose them.

Leftists in Congress are claiming that they actually are seeking “voting rights” legislation when their plans actually would diminish the security that now exists in elections.

So when Rep. Joyce Beatty, D-Ohio, staged a “vote” protest in a Washington office building where senators have offices, a stunt for which she was arrested, Donald Trump Jr. chimed in with a comment.

Beatty had claimed, “Black woman are demanding OUR right to vote! We’re marching to the Senate to send a strong message.”

To which Trump Jr. responded, “This is terrible. I had no idea that Black Woman couldn’t vote. How is this not a bigger story?”

This is terrible. I had no idea that Black Women couldn’t vote. How is this not a bigger story? https://t.co/CNxjcE8kS2

The Hill explained that Beatty was arrested by Capitol Police for “illegal demonstration activity.”

Beatty wants adopted her party’s For the People Act, which essentially would federalize all practices for elections across the U.S., a function that the Constitution now assigns to states.

Multiple Republican-led states have begun working on measures to increase ballot security, and the issue flared again this week when Democrats in the Texas legislature fled the state so that the state House would not have a quorum and could not vote on its plan.

The Texas governor has said those Democrats could be arrested when they return to the state.

Gov. Greg Abbott said, “If these people want to be hanging out wherever they’re hanging out on this taxpayer-paid junket, they’re going to have to be prepared to do it for well over a year.”

CBS reported Beatty, the head of the Congressional Black Caucus, and eight other protesters were arrested on Thursday “after demonstrating” in the atrium of a Senate office building.

The activists were in the Hart Senate Office building, changing “free the vote” and other slogans. Officers bound their hands with zip ties.

Capitol Police said they were warned three times to stop before they were arrested for breaking a law that bans “crowding, obstructing, or incommoding.” Specifically, it orders demonstrators not to resume their protesting after they’ve been told by policy to stop.