Dominion spokesman: Mike Lindell 'is begging to be sued' 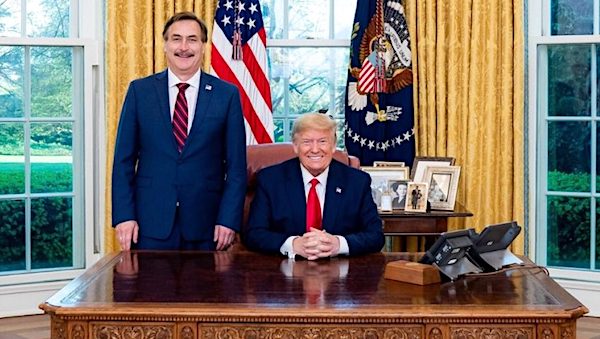 Dominion Voting Systems already has sued pro-Trump lawyer Sidney Powell and former personal attorney Rudy Giuliani, and now it has its eyes on MyPillow CEO Mike Lindell after the release of his election-fraud documentary “Absolute Proof.”

“I’m not here to make news on that front,” Steel replied. “But let me say this: Mike Lindell is begging to be sued, and at some point we may well oblige him.”

In his two-hour documentary, released Friday, Lindell interviewed cybersecurity experts who explained why they believe Dominion machines and others were designed for fraud and were used to manipulate votes in Joe Biden’s favor.

Dominion, The Hill reported, has accused Lindell of having “positioned [himself] as a prominent leader of the ongoing misinformation campaign” that fraud changed the outcome of the presidential election.

Lindell is fighting back, telling former White House chief strategist Stephen Bannon in his “War Room” podcast Saturday that he plans to sue Dominion and another voting technology company, Smartmatic.

“This latest ‘documentary’ that he aired is nothing but the same old half-baked conspiracy theories repackaged. And the truth is catching up with him,” Steel said.

Twitter permanently suspended Lindell, and major retailers Bed Bath & Beyond, Kohl’s and others have stopped selling his products. The consumer organization Media Action Network reacted with a boycott of Bed, Bath & Beyond, which saw its stock plunge 36% in one day of trading.

Lindell to Dominion: Come on TV with me

Lindell said he is considering “legal options” after YouTube, Vimeo and other streaming services deleted his two-hour documentary.

“I’m looking at everything for everything,” Lindell told the Washington Examiner. “I’m taking in all my options.”

Lindell said he’s determined to stay ahead of Dominion.

Lindell told the Examiner he wants Dominion representatives to “come on TV and go through the evidence and explain to the American people their defense.”

“If I’m wrong, which I’m not, do you think I would be all-in like this?” Lindell said. “I’ve been around. I have 2,600 employees. I’m not out to make a big embarrassment out of myself.”

Larry C. Johnson, a former analyst for the CIA and the State Department’s Office of Counterterrorism, outlined what he saw as the strengths and weaknesses of Lindell’s documentary in a post for the Gateway Pundit blog on Monday.

The documentary is available on a website Lindell created. It was aired by One America News several times over the weekend. But following threats of a lawsuit by Dominion, OAN put a disclaimer on it, stating it is paid programing and “opinion only.”

Newsmax TV and others also have distanced themselves from claims that Dominion and Smartmatic systems were designed for fraud and were manipulated to steal the election from Trump.