'Did it again': Schiff lied about and doctored critical Jan. 6 text 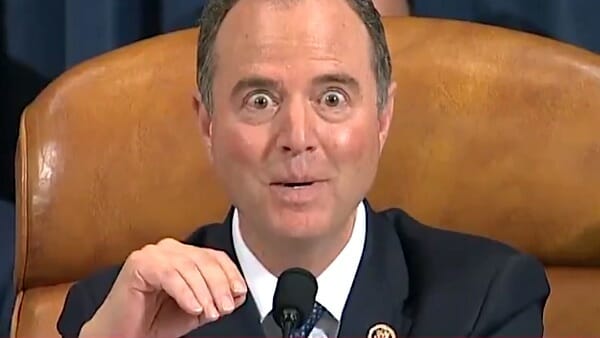 U.S. Rep. Adam Schiff, D-Calif., is famous for claiming over and over during President Trump’s term in office that he had “proof” of his party’s concocted “Russia collusion” conspiracy theory.

Even though that was debunked.

Now he’s pursuing a campaign against Trump and other members of the Republican Party who exchanged text messages before and during the vandalism of the U.S. Capitol last Jan. 6.

By lying about those messages, and changing them around to fit a narrative.

That’s according to an analysis by Sean Davis, a co-founder of The Federalist.

The investigation noted it was not the first time Schiff has held the truth loosely.

“After leaking fake Donald Trump, Jr. emails, fabricating the transcript of a 2019 phone call between former President Donald Trump and Ukraine’s president, and lying about his interactions with the so-called whistleblower behind House Democrats’ first impeachment of Trump, Rep. Adam Schiff, D-Calif., is now running the same con against a fellow lawmaker.”

Davis explained it was during this week’s hearing on the riot at the Capitol that Schiff “claimed to have proof that a member of Congress texted former White House chief of staff Mark Meadows to instruct former Vice President Mike Pence to overturn the 2020 presidential election results.”

Schiff claimed that he had a message from someone in Congress to Meadows.

Schiff claimed, “You can see why this is so critical to ask Mr. Meadows about. About a lawmaker suggesting that the former vice president simply throw out votes that he unilaterally deems unconstitutional in order to overturn a presidential election and subvert the will of the American people.”

But The Federalist, which obtained and reviewed the original sources, said Schiff’s narrative was anything but the truth.

“Not only did Schiff lie about the substance of the text message and its source, he even doctored the message and graphic that he displayed on screen during his statement. The full text message, which was forwarded to Meadows from Rep. Jim Jordan, R-Ohio, on the evening of Monday, Jan. 5, was significantly longer than what Schiff read and put on screen, but Schiff erased significant portions of the text and added punctuation where there was none to give the impression that Jordan himself was tersely directing Meadows to give orders to Pence on how to handle the electoral vote certification.”

The investigation revealed the original was from Washington attorney and former Department of Defense Inspector General Joseph Schmitz and included a four-page draft that detailed Schmitz’s legal reasoning for suggesting Pence had the constitutional authority to object to the certification of votes from several states.

It comments were published at the time.

Schmitz wrote a three-paragraph summary, explaining the foundation for the position came from “founding father Alexander Hamilton and judicial precedence.”

But Schiff “sliced and diced” the statement, then attributed it to Jordan, the investigation showed.

Schmitz’s explanation noted that Hamilton wrote in Federalist No. 78 that no legislative act “contrary to the Constitution, can be valid.”

The investigation confirmed, “According to a source familiar with the matter, Schiff never approached Jordan to discuss the text messages prior to chopping them up and misrepresenting them during Monday night’s hearing. Had he done so or bothered asking Jordan about the text message, Schiff would have known that Jordan was merely relaying to Meadows, without comment, an attorney’s summary of that attorney’s own legal argument as to what Pence should or shouldn’t do.”

The Federalist review warned, “Schiff and his team have a long history of doctoring and fabricating evidence to show their political enemies in the worst possible light. While Trump, Jr. was testifying during a 2017 congressional hearing on the Russian collusion hoax, Schiff’s committee leaked to CNN and NBC emails purportedly from Trump, Jr. that showed he had communicated with someone about hacked WikiLeaks documents prior to their public release.”

But the reality was that a random person had sent Trump Jr. information after the documents were “publicly available.”

Then Schiff, during House Speaker Nancy Pelosi’s failed 2019 attempt to impeach and remove Trump, made up a phone conversation between Trump and Ukrainian President Volodymyr Zelensky, later claiming, “without evidence” according to The Federalist, it was a parody.

The report also revealed Schiff lied about not knowing the identity of a “whistleblower” who tried to create grounds for impeachment of President Trump.

In opening statement, Rep. Schiff makes up dialogue to represent what Trump said to Zelensky. A rough transcript of the president’s words exists, and is available, but Schiff’s version is more dramatic. pic.twitter.com/f7gS4KIPge

Rep. Schiff re-writes the call transcript for added drama: “I’m going to say this only seven times, so you better listen good, I want you to make up dirt on my political opponent, understand, lots of it, on this and on that, I’m going to put you in touch with people” pic.twitter.com/1rV7BpEN6o