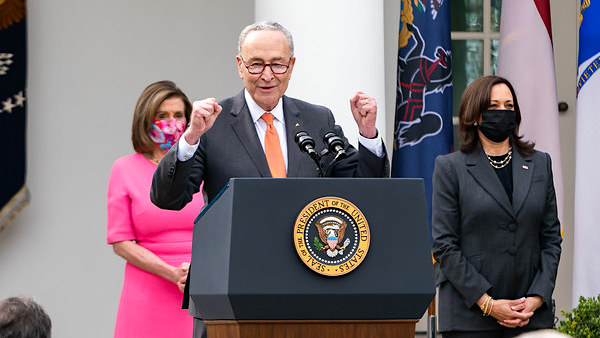 The Democrats’ agenda to add to whatever election manipulations may or may not have taken place in 2020 through their H.R. 1, an 800-page bill that would put all elections under the control of Washington, took a serious hit over the weekend.

That’s when Sen. Joe Manchin, a party member from West Virginia, wrote in a commentary that he could not support the legislation.

He said the truth is that “voting and election reform that is done in a partisan manner will all but ensure partisan divisions continue to deepen.”

In other words, the plan by Democrats would make the divisions in the nation worse.

The backdrop is that the Senate is divided 50-50 between the parties, so the Democrats could only pass the plan, which Republicans have refused to support, with every member of their party – plus a tie-breaking from the vice president, Kamala Harris. And that vote would happen only of Democrats essentially destroy the character of the Senate by blowing up the filibuster rule.

Manchin explained he’s worked hard to protect the right to vote, expanding opportunities while he was West Virginia’s secretary of State.

But he said the issue today is “overtly politicized” and that it focuses on “seeking partisan advantage.”

Now, a lawyer who wrote a commentary at the Federalist said the proposal is a “dead man walking” even if Democrats kill the filibuster and shame Manchin into spouting his party’s talking points.

Nathan Lewin, a Washington lawyer who has argued 28 cases in the Supreme Court, said the result would “be doomed by a constitutional principle even the most liberal justices of the Supreme Court have recently endorsed.”

“The limited ‘make or alter’ power granted Congress in a subsidiary clause does not entitle it to enact a sweeping law that is neither ‘congruent’ nor ‘proportional.’ H.R. 1 would replace the authority explicitly assigned by the same constitutional section to ‘each State by the Legislature thereof.’ If H.R. 1 is now enacted, it is a dead man walking to certain execution under binding Supreme Court precedent,” he explained.

He continued, “‘Congruence and proportionality mean a law cannot be indiscriminately broad unless there is evidence such sweeping coverage is necessary. Congress may not displace a large area of local legislation, but must selectively address specific ills shown through legislative hearings and committee findings.”

He said that standard was affirmed in 2000 in a dispute over state immunity from lawsuits under the Americans with Disabilities Act.

At that time the justices noted the problem had been investigated in a multitude of congressional hearings, offering evidence of problems. But Lewin noted H.R. 1 has not had any hearings at all.

“The most compelling precedent showing the unconstitutionality of H.R. 1 is the Supreme Court’s invalidation of provisions of the Religious Freedom Restoration Act (RFRA). RFRA authorized lawsuits against state and local governments for imposing burdens on religious rights. The Court ruled in City of Boerne v. Flores in 1997 that RFRA – passed by an almost-unanimous bipartisan Congress – ‘reflect[ed] a lack of proportionality or congruence between the means adopted and the legitimate end to be achieved.’”

It was then Congress then held hearings over the course of three years on religious discrimination problems, which produced the Religious Land Use and Institutionalized Persons Act which was upheld in 2005.

Manchin argued that “voting and election reform that is done in a partisan manner will all but ensure partisan divisions continue to deepen.”

He continued, “It has been said by much wiser people than me that absolute power corrupts absolutely. Well, what I’ve seen during my time in Washington is that every party in power will always want to exercise absolute power, absolutely. Our founders were wise to see the temptation of absolute power and built in specific checks and balances to force compromise that serves to preserve our fragile democracy. The Senate, its processes and rules, have evolved over time to make absolute power difficult while still delivering solutions to the issues facing our country and I believe that’s the Senate’s best quality.”