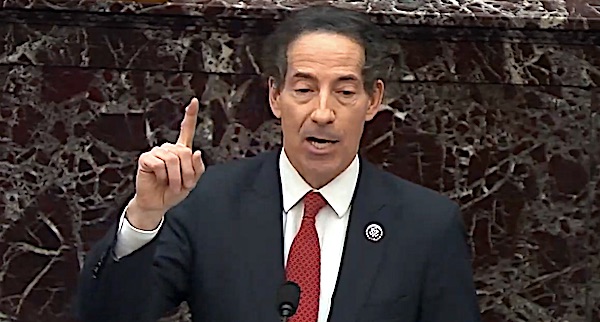 Multiple members of the impeachment team assembled by Rep. Nancy Pelosi, D-Calif., against former President Trump, now on trial in the U.S. Senate, argued on Wednesday that his rhetoric, talking about “fighting,” provoked rioters to break into and vandalize the Capitol on January 6.

But even as they were making their charges, the Trump War Room was putting them on the spot, posting the “fight” words that the Democrats have themselves used.

FLASHBACK: Rep. Jamie Raskin in an interview with the Atlantic in 2019:

“Let’s hope for the best, be prepared for the worst, and go fight like hell…” pic.twitter.com/Z3jlfH10Er

It was to urge his social media followers to take action over the Supreme Court after Ruth Ginsberg died last year.

He also said, in 2017, he’d “fight like hell for liberal democracy” and during the Russian collusion conspiracy investigation, he said, “This is our democracy – fight for it.”

For his part, Trump said to his rally attendees they should “fight like hell” for their country.

Fox described the actions as having “turned the tables” on the Democrats, who are not expected by analysts to get enough votes to convict Trump of inciting insurrection, as claimed by Pelosi in an article that was supported by no witnesses and no evidence in the House.

Similarly, Rep. Joe Neguse, D-Colo., who mischaracterized a constitutional expert’s opinion on impeachment just one day earlier, and was called out by the law professor, Jonathan Turley, talked about his “fight to take back Congress…”

“humbled to have the support of such a fearless leader as we fight to take back Congress…” pic.twitter.com/2mPiTdhaMw

Rep. Eric Swalwell, D-Calif., who is considered by Republicans to have been compromised by his relationship with a known Chinese operative, also came in for criticism.

One of the many reasons Swalwell was a ridiculous choice for impeachment manager.

He’s talking about threats to officials.. but when Susan Collins and her staff got violent rape threats during the Kavanaugh confirmation he tweeted “boo hoo” and “where are you sleeping?” pic.twitter.com/gzhoHhKpko

Rep. Ted Lieu was cited for having promised to “fight back.”

“when they go low, we fight back.” pic.twitter.com/K0vN4hxEC6

Significantly, the Democrats’ video that portrayed the violence at the Capitol, and also included statements from President Trump, left out his statement asking supporters to protest “peacefully.”