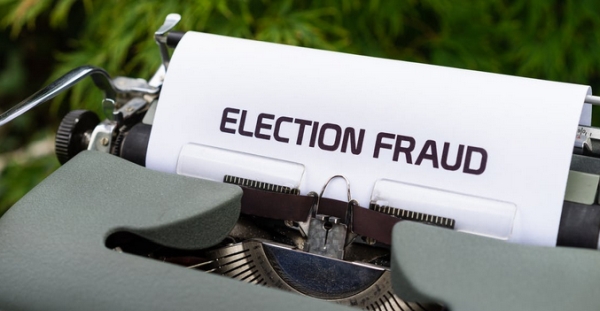 President Trump and his supporters for weeks after the 2020 election argued that voting machines likely miscounted or misread valid votes, possibly costing him the election.

Of course there also were claims of willful election fraud and manipulation, but the dozens of court cases that were brought largely were thrown out before evidence of that could be publicly vetted.

But the response to GOP claims was immediate and brutal. Those claims were unjustified and impossible, said Democrats. Democrats in Congress have said people with those beliefs need to be deprogrammed. The voting machine companies launched a long list of cases claiming defamation over statements that the machines malfunctioned.

Now a Democrat is making the same arguments.

That race is between former U.S. Rep. Claudia Tenney and Democrat candidate Anthony Brindisi. Tenney reports a 125-vote lead, of some 300,000 votes cast, in the latest tabulation, the certification of which has been delayed yet again by a judge at Brindisi’s request.

A lawyer for Brindisi now has argued in court, “There is reason to believe that voting tabulation machines misread hundreds of not thousands of valid votes as undervotes, and that these tabulation machine errors disproportionately affected Brindisi.”

Tenney explained in an email to supporters, “While my lead has only grown since November, my Democrat opponent – and the high-profile lawyers which Nancy Pelosi sent to do battle against me – refuse to concede.

“Why? Because if I’m certified the winner of this race, Republicans will only need to pick up six seats next year to flip the House of Representatives.”

The Times’ Rowan Scarborough explained that the machines at issue are Dominion Voting Systems, “the same ballot scanners vilified by Trump supporters in battleground states, and defended by winning Democrats.”

The arguments are being created by Marc Elias, of the D.C. Perkins Coie law firm, and the report reveals he “led a team of President Biden attorneys successfully fighting Trump challenges in over 50 courts.”

Elias is claiming, “In addition, Oswego County admitted in a sworn statement to this court that its tabulation machines were not tested and calibrated in the days leading up to the November 3, 2020 General Election as required by state law and necessary to ensure that the counts generated by tabulation machines are accurate.”

Legal analyst and political commentator Jonathan Turley, of George Washington University, noted Friday in an online posting that he wasn’t so surprised by Elias challenging Dominion Voting Systems as he was “that he remains one of the leading lawyers enlisted by Biden and the Democratic party after the Steele dossier scandal.”

That was the scheme hatched under the Barack Obama administration to use falsified documents to present to a court to obtain permission to spy on aides within the Trump 2016 presidential campaign and undermine it. And then to undermine the presidency of Donald Trump. U.S. intelligence agents openly discussed how to assure that Trump would not win, and having an “insurance policy” if he did.

The dossier created by ex-British agent Christopher Steele was funded by the Hillary Clinton campaign in 2016 and others, and made wildly unsubstantiated claims about President Trump. The report was manipulated by the FBI so that it could be made public in an attempt to damage Trump’s presidency.

Evidence now shows that a large part of the affiliated Russia collusion claims against Trump, now debunked, were pushed by the Clinton campaign in an attempt to divert publicly scrutiny from the scandal of her using an unsecured private computer server for national secrets while she was secretary of state for Obama.

Turley explained, “It appears that Marc E. Elias is back. The Perkins Coie lawyer was the focus of stories related to the Steele dossier and the long-denial of the Clinton campaign that it actually funded investigation. Despite such false statements by the campaign before the election, the money was found to have been paid out as a legal expense through Elias as counsel for the campaign. Elias also reportedly was present when this funding was denied to the media and to Congress. The Biden campaign enlisted Elias to lead efforts in election challenges despite that history. He is now making a curious argument in New York for a Democratic lawyer: he is alleging that thousands of votes may have been switched or changed by Dominion voting machines.”

Turley explained he has written about “Elias’ role in what many view as an effort to hide and deny the role of Clinton in the dossier, which was later discredited on many of its allegations. He was present that any connection to the Clinton campaign was denied to congressional investigators. No one was charged for many false statements in the interview.”

Turley noted the background, that the Clinton campaign denied any involvement in the creation of the Steele dossier that was later used to secure a secret surveillance warrant against Trump associates during the Obama administration.

“Journalists later discovered that the Clinton campaign hid the payments to Fusion as ‘legal fees’ among the $5.6 million paid to the law firm. New York Times reporter Ken Vogel at the time said that Clinton lawyer Marc Elias had ‘vigorously’ denied involvement in the anti-Trump dossier. When Vogel tried to report the story, he said, Elias ‘pushed back vigorously, saying ‘You (or your sources) are wrong.” Times reporter Maggie Haberman likewise wrote: ‘Folks involved in funding this lied about it, and with sanctimony, for a year.’ Even when Clinton campaign chairman John Podesta was questioned by Congress on the matter, he denied any contractual agreement with Fusion GPS. Sitting beside him was Elias, who helped devise contract,” Turley noted.

“Later, confronted with the evidence, Clinton and her campaign finally admitted that the dossier was a campaign-funded document that was pushed by Steele and others to the media,” Turley said. “Few reporters pursued the alleged false statement by Podesta to investigators or Elias’ role in what Haberman denounced as lies to the media. Perkins Coie was also not apparently concerned by his role.

Democrats hold a 222-211 majority in the U.S. House now, the slimmest majority in years. Tenney’s seat is unfilled at this point, as is a Louisiana seat left open by the death of Republican Rep.-elect Luke Letlow.

If Tenney is seated, Speaker Nancy Pelosi would not be able to lose any more than five votes on any partisan issue or she would not be able to deliver on the Biden agenda. The margin also makes it likely that there will be a GOP majority in the House following the 2022 election, since the party of the president in the White House routinely loses several dozen seats during midterms.