Crowd laughs at Jill Biden as she promotes COVID shots 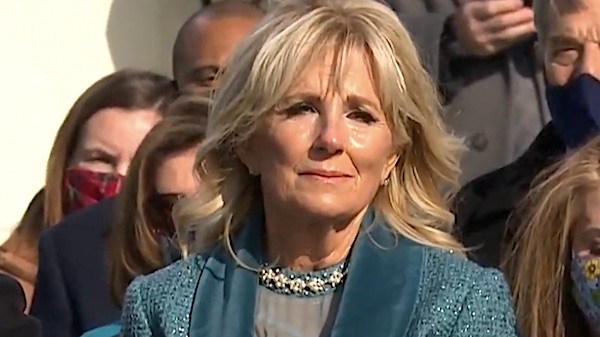 Joe Biden’s administration has promoted a range of COVID-19 messages during the president’s few months in office. He said at one point there were no vaccines ready when President Trump left office, even though there were.

Then he set a goal of a million vaccinations a day, but that was just about what Trump’s administration had reached before he left office.

Recently, he’s been telling everyone to get shots, and insisting that at least 70% of all Americans have at least one dose by July 4, a benchmark the administration itself admits now is unlikely.

Part of the problem may be the messaging itself.

After all, Jill Biden was dispatched on a vaccination promotion tour this week, and after criticizing a crowd in Tennessee for the state’s low vaccination rate, was laughed at.

FLOTUS has arrived in Nashville to promote the COVID-19 vaccine at a pop-up clinic. Currently shaking hands, expected to speak shortly. County music superstar Brad Paisley will sing to show his support.

The crowd winces, then boos.

“Well,” she says, “you are booing yourselves.”

According to Twitchy, her appearance “did not go well. According to The Tennessean’s Brett Kelman, she was booed and then the crowd laughed at her response when she lectured them on the state’s low vaccination rate.”

Kelman, in fact, explained that the event actually was missing “what it needed most – people getting vaccinated.”

“It appeared that only a few dozen vaccine recipients trickled through the pop-up vaccination clinic at the Ole Smoky Distillery south of Lower Broadway on Tuesday afternoon, and when Biden arrived at the event, only about 10 were there to greet her. Biden shook hands and thanked the small group, then leaned in close to comfort a teen at the moment she got her shot,” he explained.

“In some ways, the lack of recipients at the Tuesday event illustrates the exact problem the first lady hopes to solve. Vaccinations are stalling across the country, and the pace in Tennessee is among the slowest. Only 41% of Tennesseans have received at least one dose of a vaccine so far, the sixth-lowest percentage of all U.S. states, according to the Centers of Disease Control and Prevention,” Kelman explained.

Kelman said that Biden said she couldn’t understand not getting the vaccines, because she believes they’re save, effective and free.

The report noted, “Biden’s advocacy tour is part of the White House’s uphill battle against widespread vaccine mistrust that is deeply entangled in America’s political divide.”

In fact, while the Centers for Disease Control itself contends that “COVID-19 vaccines are safe and effective,” it also warns of the possibility of “anaphylaxis,” “thrombosis with thrombocytopenia syndrome,” “myocarditis and pericarditis” and confirms that almost 5,400 people in the U.S. alone have died after getting a COVID-19 vaccine.