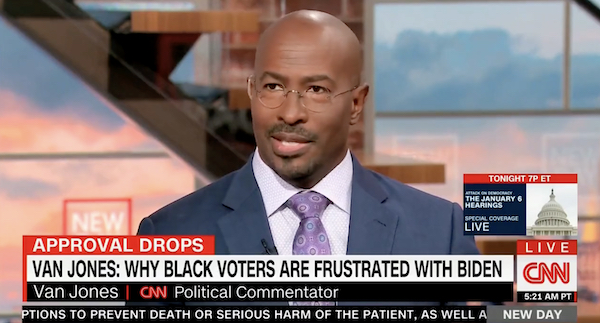 The poor economy is a “special heartbreak” for African-American voters, in part because of the trust they put in Joe Biden, says CNN contributor and longtime Democratic activist Van Jones.

First of all, he said in a segment Thursday, “the pain is more intense.”

“But the hope was so much higher,” he said. “You have a community that came out in huge numbers in 2018, huge numbers in 2020, expecting things to get a lot better and, instead – economically, at least – it didn’t come true. It got worse.

“And so, you’re going through a summer now of real heartbreak with black voters – the polls show that,” he said.

“And I think Biden has got to take that very seriously.”

Sen. Tim Scott: ‘Unprecedented progress’ for blacks under Trump
In June 2020, amid the COVID pandemic and racial turmoil in the wake of the death of George Floyd, a Rasmussen poll of likely voters shows a remarkable 41% of blacks approved of the performance of then-President Trump.

In the 2016 election, Trump won only 8% of the black vote, a typical figure for Republican candidates.

While some might have viewed the survey by the “conservative” Rasmussen as an outlier, its finding in December 2019 of 34% approval among blacks was affirmed by an Emerson College poll that had it at 35%. And a Marist poll at the time found 33% of non-white voters in approval of the president.

At the time, Black Republican Sen. Tim Scott of South Carolina praised Trump’s work for the black community in an interview, saying “the last three years of progress have been unprecedented in my lifetime.”

“If we have that conversation, there will be a clear delineation about progress that has been made on behalf of of the most vulnerable communities in this country under President Trump, and some of the challenges that were inspired and enacted by Vice President Biden,” he said. “So that would be a clear contrast and one that would be worthy of actual investment of time, energy to hear that debate.”

Meanwhile, one of Biden’s key black supporters, Rep. James Clyburn – credited with rescuing the former VP’s flailing campaign by endorsing him in South Carolina – said he “cringed” at Biden’s assertion in an interview that black voters “have a problem figuring out whether you’re for me or Trump, then you ain’t black.”

Among Trump’s accomplishments for blacks, Scott said, are permanent funding for historically black colleges and universities and the creation of 7 million jobs, two-thirds of which went to minorities and to women.

“We had an increase the labor force participation rate among African-Americans,” Scott said. “Home ownership, I believe, was up by two points under this administration. Access to a quality education improved, help for sickle cell anemia secured under this president, so when you look at the actual accomplishments – put aside all of the vitriol, all of the rhetoric, all of the things that some may find distasteful – the actual policy positions have been incredibly concrete.

“And I would say this has been the best policy position of a president in my lifetime, and that’s what I know from just personal experience and having watched this for the last 30 years of my life.”

Senior Trump campaign official Katrina Pierson, who is black, said Trump’s support among blacks was “going in the right direction.”

Pierson noted Trump had respect in the black community long before he ran for president, with Don King and Jesse Jackson counted among his friends. But when he ran for the presidency, she said, the Democrats smeared him as a “racist.”

“He couldn’t understand it at first, and it’s very frustrating,” said Pierson. “But it came with the baggage of running as a Republican.

“It went through a couple of years, during the campaign, where Trump’s a racist, he hates brown people, but yet he’s doing all of these things that the first black president never did for black people, and so you kind of have this new perspective on who Donald Trump is,” she said.

Trump also had the support of superstar rapper Kanye West, who advised black Americans in an appearance in New York City not to vote Democrat. And in an interview, he said black Americans have been “brainwashed” by Democrats who are making them abort their children.