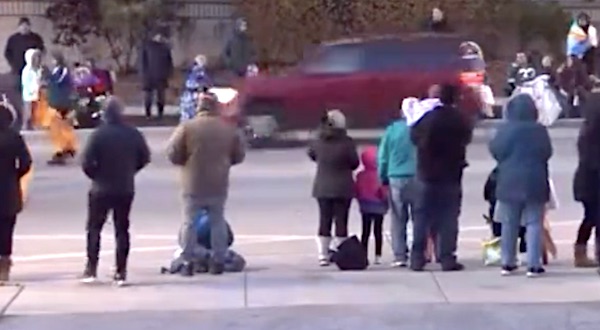 At least 20 people were injured Sunday in a mass-casualty event as a car plowed into the Christmas Parade in Waukesha, Wisconsin, an hour’s drive from the city of Kenosha where Kyle Rittenhouse was acquitted last week on murder charges.

A red SUV was seen speeding through police barricades and striking a number of people shortly before 5 p.m.

You can see a red SUV speed right past these band members, hear screams and then a law enforcement officer running. @fox6now pic.twitter.com/8lO5oRuP1I

Reports say shots were fired at the popular annual event, and it is not known at this time if the incident had anything to do with the not guilty verdict for Rittenhouse.

Police said the suspect’s vehicle “was recovered” and a “person of interest” was identified but not named, according to WISN-TV. The police chief would not say if that person was in custody.

Corey Montiho, a School District of Waukesha board member, was by a restaurant when he heard his daughter’s youth dance team was struck.

“There were pom-poms and shoes and spilled hot chocolate everywhere,” he told the Milwaukee Journal Sentinel. “I had to go from one crumpled body to the other to find my daughter. My wife and two daughters were almost hit. Please pray for everybody. Please pray. My family is safe but many are not. I held one little girl’s head in my hand, she was seizing and she was bleeding out of her ears. I held her mother as she collapsed. Please pray.”

Angelito Tenorio, a West Allis alderman who is running for Wisconsin state treasurer, told the paper he had just finished marching in the parade with his family and friends.

“As we were walking back in between the buildings that we saw an SUV crossover, just put the pedal to the metal and just zooming full speed along the parade route. And then we heard a loud bang, and just deafening cries and screams from people who are who are struck by the vehicle,” Tenorio said. “And then, and then we saw people running away or stopping crying, and there, there are people on the ground who looked like they’d been hit by the vehicle.”

He added, “It just all happened so fast.”

A reporter on scene indicated the crowd could hear thuds as the vehicle rammed people, leaving many on the ground. The reporter noted police told parade watchers to get off the street and head into stores.

Ashlee Coronado, a 12-year-old student, was at the event with her mother.

“We were excited to see the truck with the fire and the hot air with it,” she told the Journal Sentinel. “We always get excited for it because it is cold that that warms us. Then right then, a red (vehicle) drove past me and my cousins. He was going very fast and hit a gentleman. At first I thought he was a part of the parade. And then I thought this is real. We were all screaming. We were not even two feet away.”

Kimberlee Coronado said: “We grabbed our kids and got to our cars and got out of there. It was very scary.”

“I am in shock,” said Alderman Don Paul Browne, who had marched in the event. “This parade draws people from all over, even Jefferson County. I am numb. It is pretty upsetting.”

“My inclination was to try to help, but that may be the last thing the police would need. The best I can do is be a source for people. We have to worry about shootings now. It breaks my heart.”

Gov. Tony Evers tweeted: “Kathy and I are praying for Waukesha tonight and all the kids, families, and community members affected by this senseless act.”

“I’m grateful for the first responders and folks who acted quickly to help, and we are in contact with local partners as we await more information.”

“I have been in contact with Mayor Reilly and offered any resources the county could provide. I have also spoken with the Governor who offers his prayers and assistance.”

“This is an unspeakable tragedy, affecting us all as we work to overcome an extremely challenging two years and resume our cherished holiday traditions. Keep the families affected in your thoughts as we work to offer whatever support we can.”

Is it possible we’ve all been missing something extraordinary in life? Can we really discover and understand the secret to EVERYTHING? Joe Kovacs has just written an inspiring new book that unlocks hundreds of mysteries!