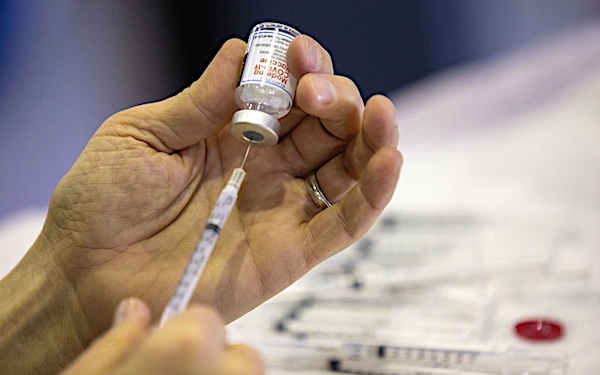 After nearly 16 months of observation, CDC and U.K. government data indicate that the COVID-19 vaccines not only are ineffective in preventing cases and transmission, they rapidly lose protection against severe illness or death while posing risks.

“So what DO they do, and WHY are we using them?” asked Dr. Meryl Nass, a board-licensed internal physician and medical researcher who analyzed the data.

She recalled CDC Director Dr. Rochelle Walensky telling CNN’s Wolf Blitzer last August that the vaccines were “working exceptionally well” during the delta variant wave to prevent “severe illness and death” while no longer preventing transmission of the virus.

Walensky, Nass wrote on her Substack page, “may have believed the vaccines prevented severe illness and death then, but she cannot possibly believe that now.”

Nass’ analysis of raw, official data of large populations with “solid endpoints” such as hospitalizations or deaths showed the vaccines failing in all of its facets.

From the CDC, she examined data on 30 million adults in California and New York, three-quarters of whom were vaccinated. Nass compared COVID hospitalization and case rates in those who were vaccinated and had no prior COVID illness with adults who were never vaccinated but had recovered from COVID and presumably had natural immunity. The data were collected from June to November 2021, before the Omicron wave appeared.

She found vaccinated Californians and New Yorkers were three times more likely to develop COVID than those who had prior immunity and were unvaccinated.

Further, vaccinated Californians had a higher rate of hospitalizations (severe illness) than those who were unvaccinated but had prior immunity. New York did not provide hospitalization data.

Meanwhile, a former adviser to the FDA commissioner who continues to serve in an oversight role says the agency is ignoring its requirement to disclose clear safety and efficacy problems with the COVID-19 vaccines. Last month, an Army flight surgeon testified in federal court that she was ordered by high-level command not to discuss the controversy over Department of Defense data indicating a massive spike in serious injuries and illnesses among military personnel when the vaccines were rolled out in 2021. And, among many other safety signals, an analysis of CDC data by a former Wall Street executive an an insurance industry expert shows an alarming rise in excess deaths among Millennials over the past year amid the COVID vaccine rollout.

On Monday, the Food and Drug Administration released a briefing document that says the composition of the current Covid-19 vaccines might need a change to ensure high levels of protection. The document spells out the objectives of the FDA’s committee of vaccine experts when it meets Wednesday.

Nass argued the vaccine failures indicated in the huge study cannot be attributed to the milder omicron variant, because the data were collected during the delta wave.

The age-standardized data from the U.K.’s Office of National Statistics covered Jan. 1, 2021, through Jan. 31, 2022, which included both the delta and Omicron waves.

The data indicated the double-vaccinated were protected against death for most of 2021, she said. But in December 2021 and January 2022, COVID death rates in the doubly vaccinated but unboosted were higher than in those who had never been vaccinated.

Nass, as WND reported, has had her license suspended while a Maine board conducts an investigation that includes a psychological examination for allegedly spreading “misinformation” about COVID-19 and administering effective treatments such as ivermectin and hydroxychloroquine.

In her analysis of the CDC and U.K. data, she listed other conclusions:

Nass, along with her clinical practice, is a biological warfare epidemiologist who has developed a model for analyzing epidemics to assess whether they are natural or man-made. She has testified to Congress six times and to several state legislatures on bioterrorism, Gulf War syndrome and vaccine safety. She has consulted for the World Bank, the Government Accountability Office and the U.S. Director of National Intelligence regarding the prevention, investigation and mitigation of chemical and biological warfare and pandemics.