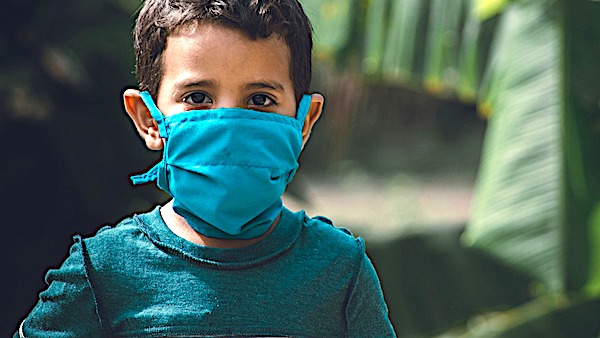 Amid the intense battle over mask mandates, New York magazine noted noted a large-scale study published by the Centers for Disease Control and Prevention that found no statistically significant difference in schools that required students to wear masks compared to schools where masks were optional.

“The 21% lower incidence in schools that required mask use among students was not statistically significant compared with schools where mask use was optional,” the CDC said.

“This finding might be attributed to higher effectiveness of masks among adults, who are at higher risk for SARS-CoV-2 infection but might also result from differences in mask-wearing behavior among students in schools with optional requirements.”

New York magazine’s David Zweig pointed out that the findings, along with other mitigation efforts that have been shown to have statistically insignificant results, “cast doubt on the impact of many of the most common mitigation measures in American schools.”

On Friday, meanwhile, COVID-19 data in Oregon showed the new statewide mask mandate has not flattened the rate of infection, according to a Oregon Health & Science University analysis.

“We had hoped to see the new statewide masking mandate make a difference in flattening the rate of infection, but we’re not seeing that yet,” he said.

New York magazine noted that many European nations have exempted students from mask mandates, including the U.K., the Netherlands, France, Italy and the Scandinavian countries.

“Conspicuously, there’s no evidence of more outbreaks in schools in those countries relative to schools in the U.S., where the solid majority of kids wore masks for an entire academic year and will continue to do so for the foreseeable future,” wrote Zweig.

“These countries, along with the World Health Organization, whose child-masking guidance differs substantially from the CDC’s recommendations, have explicitly recognized that the decision to mask students carries with it potential academic and social harms for children and may lack a clear benefit.”

The Foundation for Economic Education, which spotlighted the New York magazine story, commented that the CDC’s findings “are not helpful to politicians and bureaucrats who continue to argue that students must be masked during school.”

President Biden’s top health advisor, Dr. Anthony Fauci, said during a recent panel discussion streamed online that whether students “are vaccinated or not, they need to wear a mask.”

FEE noted that in the CDC’s summary of its report — which has received little media attention — it neglected to include its finding that “required mask use among students was not statistically significant compared with schools where mask use was optional.”

The Biden administration recently directed Education Secretary Miguel Cardona to employ “all of his oversight authorities and legal actions” against governors such as Ron DeSantis of Florida who have supported legislation to prevent schools from implementing mask mandates.

CDC statistics, meanwhile, show children generally do no spread COVID-19 and have little risk of any adverse effects. The seasonal flu is more deadly among children than COVID-19, and the swine flu one decade ago was six times more deadly.

A recent study by the University of Louisville found that state mask mandates did not help slow the spread of COVID-19.

The researchers found that “masks may promote social cohesion as rallying symbols during a pandemic, but risk compensation can also occur.”

The first large, randomized controlled trial of its kind showed no statistically significant difference in COVID-19 cases between people who wore masks and those who did not.

A study by the Centers for Disease Control in October indicated that Americans were adhering to mask mandates, but the requirements didn’t appear to have slowed or stopped the spread of the coronavirus. And further, it found, mask-wearing has negative effects.

The Association of American Physicians and Surgeons has compiled a page of “Mask Facts” showing that the consensus prior to the coronavirus pandemic was that the effectiveness of mask-wearing by the general public in slowing the spread of a virus is unproven, and there’s evidence it does more harm than good.

The most recent CDC guidelines still recommend mask use for anyone 2 years or older in public settings and when around people who don’t live in their household.​ However, in March 2020, the CDC said masks “are usually not recommended” in “non-health care settings.”

The same month, the World Health Organization recommended people not wear face masks unless they are sick with COVID-19 or caring for someone who is sick.

“There is no specific evidence to suggest that the wearing of masks by the mass population has any potential benefit. In fact, there’s some evidence to suggest the opposite in the misuse of wearing a mask properly or fitting it properly,” said Dr. Mike Ryan, executive director of the WHO health emergencies program in March 2020.

YouTube didn’t like an exchange in which Harvard epidemiologist Martin Kulldorff, responding to a question by DeSantis, said “children should not wear face masks, no. ”

Stanford’s Jay Bhattacharya said it is “developmentally inappropriate” for children to wear masks and it “just doesn’t help on the disease spread.”

“I think it’s absolutely not the right thing to do,” he said.

Bhattacharya said that “if we went back a year, a lot of experts would say that wearing masks for the general public is not evidence-based.”