CDC says it changed definition of vaccine – to be 'more transparent!' 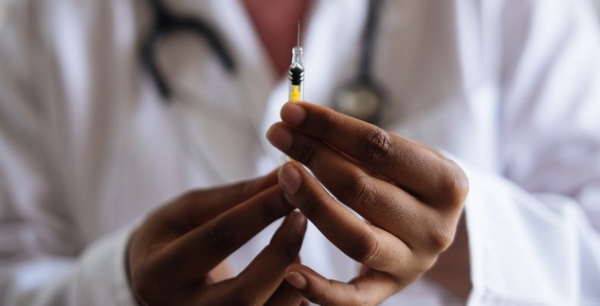 The Centers for Disease Control has reacted to a congressman’s tweet pointing out amid the COVID-19 vaccines’ waning effectiveness that the CDC’s definitions of the words “vaccine” and “vaccination” have changed.

A CDC spokesman told McClatchy News in a story published Thursday that the current definitions are “more transparent.”

Prior to the launch of the COVID-19 vaccines, the definition of “vaccination” was “the act of introducing a vaccine into the body to produce immunity to a specific disease.” And before 2015, it was the “injection of a killed or weakened infectious organism in order to prevent the disease.”

“Vaccine” previously was defined as “a product that stimulates a person’s immune system to produce immunity to a specific disease.”

Now, it’s “a preparation that is used to stimulate the body’s immune response against diseases.” 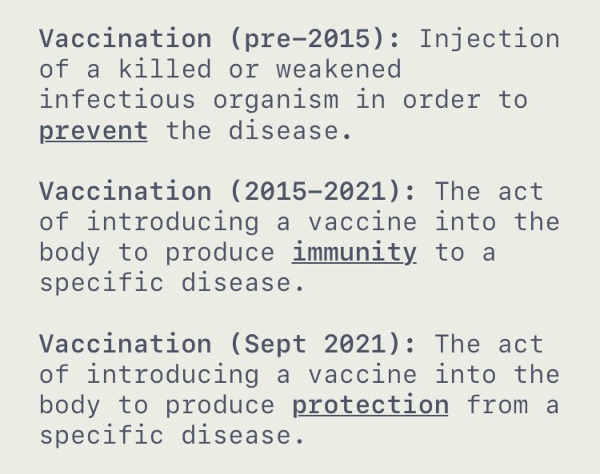 Massie spotlighted the “evolving definition” of “vaccination” with a reference to Orwell’s “1984.”

“They’ve been busy at the Ministry of Truth,” he wrote.

Check out @CDCgov’s evolving definition of “vaccination.” They’ve been busy at the Ministry of Truth: pic.twitter.com/4k2xf8rvsL

The previous definitions, the spokesman explained, “could have been “interpreted to mean that vaccines were 100% effective, which has never been the case for any vaccine, so the current definition is more transparent, and also describes the ways in which vaccines can be administered.”

“It’s also important to note that the modifications to the definition of ‘vaccine’ don’t change the fact that vaccines and the act of vaccination has prevented millions of illnesses and saved countless lives,” the spokesman added.

The CDC has acknowledged that the vaccines do not prevent the spread of the delta variant, which comprises nearly 100% of the current cases. The declining effectiveness of the vaccines is the premise for requiring vaccinated people to be masked and the push for booster shots. Instead, the agency now emphasizes that people who are vaccinated reduce the risk of hospitalization and death. However, in Israel, one of the world’s most fully vaccinated nations, most of the COVID cases are among the vaccinated. In the U.K. last month, 40% of cases had received at least one shot.

The CDC estimated that from February 2020 to March 2021, 114.6 million Americans were infected with COVID-19. Studies, including a recent one in Israel, have found natural immunity from infection to be far superior to immunity from vaccines. The Israel study found it to be 27 times more effective.

‘See what you wish to see’

In an analysis on her website, former CBS News reporter Sharyl Attkisson said the CDC has carefully “evolved” the definition of vaccination “to meet the declining ability” of the COVID-19 vaccines.

“After the Covid-19 vaccines were introduced, and it was discovered they do not necessarily ‘prevent disease’ or ‘provide immunity,’ CDC altered the definition of vaccines again to say that they merely ‘produce protection.’”

A reader, who identified herself as a registered nurse, argued that the “evolution of the definition of vaccination looks to me to be a way of increasing accuracy.”

“The second definition says vaccines produce immunity, but that could lead the public to think a vaccine produces perfect immunity against an infectious organism but none ever have. So switching to, ‘protection,’ instead of, ‘immunity,’ sounds like a way to be more accurate about all vaccines. My question to you is, why would you want to see it any other way?”

Attkisson replied: “You seem to provide a very good example of seeing what you wish to see.”

The investigative reporter said “the difference in the first two definitions isn’t about killed or weakened infectious organism, it’s about promising to ‘prevent’ a disease (which some vaccines do), then, as some vaccines proved less effective, CDC/vaccine industry lowered the bar to simply say they produce ‘immunity’ (no longer prevention).”

“Then, with immunity not well produced by Covid-19 vaccines, that necessitated another lowering of the bar to simply say you get some sort of ‘protection.’ Not immunity or prevention.”