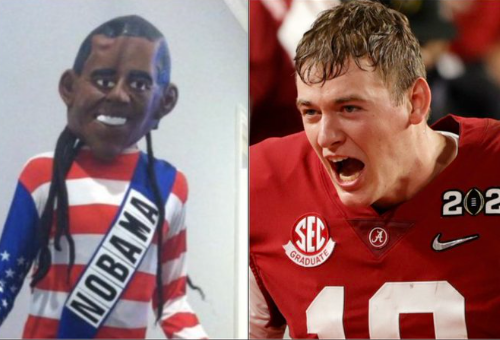 “Americans need to meet these intolerant speech bullies with an equal determination to punish entertainers and their owners who hate America forcing them to recognize that their job is to play ball, not politics.”

Top NFL prospect and former Alabama quarterback Mac Jones has come under fire just ahead of the 2021 draft over an anti-Obama costume he reportedly wore when he was a 14-year-old boy.

CSI Twitter Catches Ex-Bama QB Mac Jones in 4k Wearing a “NOBAMA” Costume w/ Dreads; His Sis Tweeted Pic Years Ago & Tried to Delete, But It Was Too Late; Twitter Ponders How Much Bosa is Going to Love Him & Why His DUI Never Gets Mentioned (Tweets-Vids) https://t.co/AEVZelSN98 pic.twitter.com/HejP8bgjX8

Immediately, the internet blew up with attacks on Jones.

It is disturbing that the crazy left has dug up a picture of Mac Jones, a former University of Alabama quarterback and likely early to mid-first round draft pick in the NFL draft, from when he was 14-year-old kid wearing a “Nobama” costume at a party. The same perpetually woke leftists don’t care at all that the actual Democrat Governor of Virginia Ralph Northam was pictured in black face in his graduate school yearbook accompanied by his nickname “Coonman,” as they try to destroy Jones’ NFL dreams.

What is even more disturbing is the reminder that in 2019, then-Ohio State University star player Nick Bosa was required by the NFL to promise to keep his “political ideas to himself” after it was discovered that he had tweeted in favor of President Donald Trump and against former 49er quarterback Colin Kaepernick’s anti-American kneeling during the national anthem.

Apparently in the NFL, free speech is a one-way street. If you salute the flag rather than spit on it, you are required to be quiet while the League pretends to support America with their taxpayer-paid for military flyovers.

Americans have been outraged this past week over Major League Baseball’s ignorant decision to move their All-Star Game out of Atlanta over voter integrity laws requiring voter identification, proving that even America’s national pastime is not immune from the cancel culture disease.

The NFL should reject the internet assault on Jones as it serves as a grim reminder that the left’s Twitter attack machine is in full destruct mode. Americans need to meet these intolerant speech bullies with an equal determination to punish entertainers and their owners who hate America forcing them to recognize that their job is to play ball, not politics.

It is our sincere hope that every other professional and college athlete who might wish to express conservative political opinions exercise that right and the various sports leagues and NCAA back them up with the same vigor they are embracing the hard left which would destroy election integrity in our nation. As far as Mac Jones is concerned, to try to cancel a kid for a costume worn when he was fourteen is despicable and should be rejected by all thinking adults.

This post, Cancel Culture Goes After NFL Prospect for anti-Obama Costume He Wore in Middle School, was originally published on The Daily Torch and is republished here with permission. Please support their efforts.