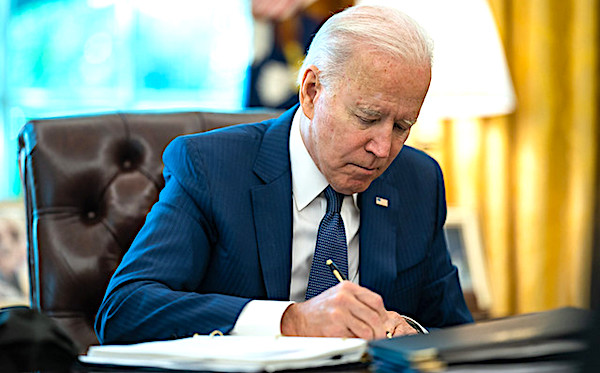 In stark conflict with a multitude of claims from Joe Biden and his administration that his massive spending program for green projects and social agenda items will cost “zero dollars,” the Congressional Budget Office has concluded it actually will add $3 trillion to the nation’s deficit.

Biden long has promoted his spending free-for-all as costing nothing.

He stated, “We talk about price tags. It is zero price tag on the debt. We’re paying – we’re going to pay for everything we spend.” He also claimed, “My Build Back Better agenda costs zero dollars.”

But that drew a “two Pinocchios” from “fact-checkers” such as Glenn Kessler of the Washington Post.

He explained, “A White House official told The Fact Checker that Biden is committed to making sure the final impact is zero, which is why he has been repeating this line in recent days. ‘It’s important to pass the bill with zero deficits,’ the official said. But it’s not so simple. Lawmakers are certain to play all sorts of budget games to achieve that mythical zero within the 10-year budget framework. One possible trick: terminating a new spending program early, before the 10 years is completed. That would ‘save’ money — and require a future Congress to decide whether to continue a possibly popular benefit.”

He continued, “We’ll keep an eye on the final outcome, but for Americans not steeped in budget arcana, the president’s claim is misleading.”

Now a report from Just the News confirms the CBO’s projection of a $3 trillion additional deficit from Biden’s plan.

“Republicans requested the CBO analyze Biden’s bill based on its policies being made permanent by Congress over 10 years, as opposed to the shorter timelines in the Treasury Department’s cost analysis of the bill,” the report said.

It raises taxes on corporations, taxes that consumers ultimately pay, as well as individuals in the highest income brackets.

“I very much appreciate CBO scoring Build Back Better without budget gimmicks,” South Carolina GOP Sen. Lindsey Graham, ranking member on the Senate Budget Committee, told Just the News. “We all know that the new provisions will not sunset — they never do.”

And the news is “very sobering,” for West Virginia Democratic Sen. Joe Manchin, a pivotal vote for the Democrats on Biden’s bill.

Wisconsin Republican Sen. Ron Johnson poked fun at the idea that a government program would actually not be continued, referencing a quote from President Ronald Reagan, who said, “Actually, a government bureau is the nearest thing to eternal life we’ll ever see on this earth!”

In the report, House Speaker Nancy Pelosi maintained the claims that Biden has repeated so often.

“Congress and President Biden have made clear: any future extensions of the life-changing provisions of Build Back Better will be fully paid for, as they are today,” she claimed