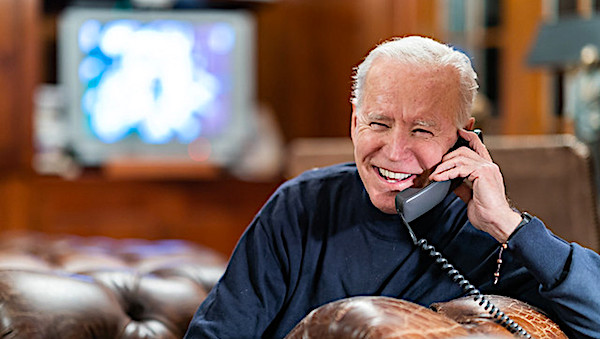 President Joe Biden is being protested, but not by conservatives.

Protesters with a group called “Occupy Biden” have spent the past week in President Biden’s Delaware neighborhood calling on him to declare a “national climate emergency.”

According to a description for the protest, which took place near Biden’s personal residence in Delaware, the group said that “nonviolent action” is needed in order to push him harder on making changes to his climate policy.

On Saturday, the final day of the group’s protest, individuals protested on a road near the president’s house while members of the Secret Service were nearby monitoring the group.

Karen Igou, a spokesperson for Occupy Biden, told Fox News that she read the group’s demands to the U.S. Secret Service in hopes of reaching President Biden.

“I actually read our letter of demands to the Secret Service because they refused to take our letter,” Igou said. “Again we have two demands: that he declare a national climate emergency and pledge no new fossil fuel projects. He himself has stated that we are in a code red existential crisis but returned from cop 26 to open up more land for drilling. This is unacceptable And [sic] incongruent with life on earth.”

The protest lasted from Dec. 25 through Jan. 1 and a spokesperson estimates 200 people participated in total.

A press release announced: “Our plan is to maintain the Climate Justice Occupation all throughout the year-ending holiday week, at all hours of the day and night. We are organizing to have the supports needed for those participating as far as food, water, warming spaces and toilet facilities. While this event is about demanding climate action in the face of woeful inaction by our government, we also call on our community to take this opportunity to work with others from all aspects of our social, environmental and political scene and in this way strengthen and enrich our movement for the people.”

Several other left-leaning organizations joined the group, including the Working Families Party, Democratic Socialists of America, Code Pink, and more.

“The president has the power to declare a climate emergency, but has not done so,” said Echo Alford of the Party for Socialism and Liberation. “He knows that we were occupying land right outside his home, but he never addressed us or our demands. The democrats [sic] control the House, Senate, and White House.”