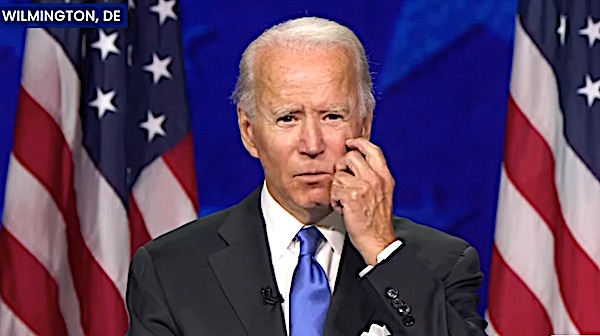 Joe Biden’s reputation for delivering nonsensical statements – well-established over the years – ratcheted up another notch on Wednesday when he claimed to have been vice president for 36 years.

“I commuted every single day for 36 years as vice president of the United States,” he claimed.

“I commuted every single day for 36 years as Vice President of the United States…” pic.twitter.com/M17Iy5H6sd

A fact-check with reality finds he was vice president for eight years, Barack Obama’s two terms in the White House.

Biden did commute on Amtrak from his home in Delaware to Washington many times over the years, but not 36 years as vice president.

Fox News detailed how Biden’s first wife, Neilia, and infant daughter Naomi died in a car crash in 1972 when he was senator-elect from Delaware. With his other children in Delaware, and his work in Washington, the now 78-year-old used Amtrak to commute many times.

He also has a long and colorful history of verbal mistakes and blunders, and Politico reported “anxiety about what Biden might say if he takes questions from the media drives some in the White House to mute him or turn off his public appearances altogether.”

The report cited a “bizarre gaffe” just weeks ago when he introduced Michigan Gov. Gretchen Whitmer and Biden claimed her lieutenant governor “covers her in every way, both in terms of physically, and mentally, and every other way.”

After introducing Michigan Gov. Gretchen Whitmer, Joe Biden thanks the lieutenant governor, who “covers her in every way, both in terms of physically, and mentally, and every other way.”

The Daily Mail reported Biden’s 36 years as VP claim came while he was telling a story about an encounter with an Amtrak conductor “for the fifth time – even though the man in question was already dead at the time the chat was supposed to have taken place.”

This familiar “story” is that Biden encountered Angelo Negri and they chatted about Biden’s traveling two million miles by rail.

Biden repeatedly has claimed the chat happened in 2015, even though Negri retired from Amtrak in 1993 and died in 2014.

The report explained, “The president’s story … contains inconsistencies which make it impossible to have happened at the times indicated.”

He turned to “paraphasia” in addressing newly naturalized citizens.

The report explained, “Paraphasia isn’t one of Biden’s words, but it is the technical term for the word salad that so often falls out of his mouth and sounds suspiciously like the way people with dementia string together real words in nonsensical ways.”

Biden actually said: “Appreciate it for joining us in this service. Look, today — uh, um — today’s special guest, uh, to all of you is my honor to congratulate the 21 of you who for have earned the title of that our democracy in every is equal to being president is of the same consequence.”

The WJ report noted, “Though this was a momentary lapse and one that he recovered from to power through – albeit with all the vigor of a tired grandpa trying to make it through the fifth reading of ‘Goodnight Moon’ to his grandkids – it’s part of a troubling pattern.”

The report noted leftists try to “explain away” Biden’s lapses but “they are becoming too frequent to ignore.”

The report continued, “Throughout the campaign, many worried about the 78-year-old’s cognitive abilities, though he could safely avoid the spotlight by calling a lid on his day before most folks his age were bellying up to the early-bird special at the buffet. But now that he’s president, Biden can’t hide in his basement and can’t take refuge in the bosom of a complicit establishment – the troubling signs of dementia are on display for the world to see.”

“The leader of the free world can’t go shuffling around confused and talking gibberish every day without grave consequences.”

Biden has an inspiring message for newly sworn citizens: pic.twitter.com/LvJ9WOsl1g

He’s famous for simple verbal failures, such as forgetting to say “New” when referring to “New Mexico,” the state and promising that Americans making under $400,000 will “not pay a single penny in taxes.”

He also blundered trying to say “oceanic” and then launched “truinnerashuvaduprezure” into the American lexicon.

Eric Trump at one point confirmed that had his father, President Donald Trump, blundered and fumbled like Biden, opponents would have risen up to use the 25th Amendment for incapacitated presidents and removed him from office.