Biden's low ratings: Here are the problems – and the solution 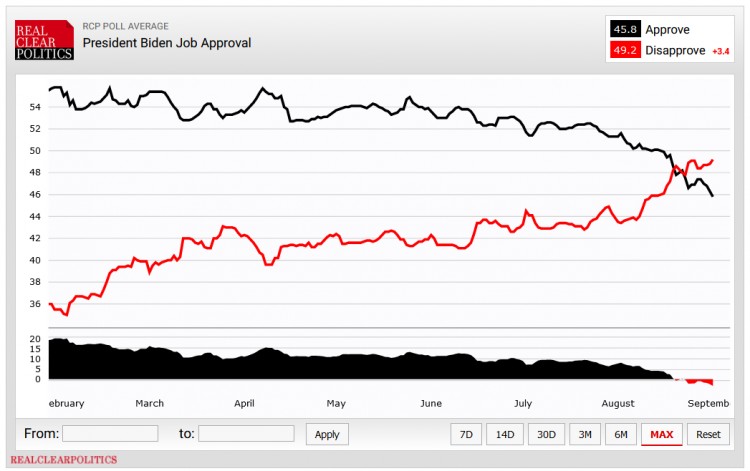 Joe Biden is senile. That should be obvious to any rational person. He commits an embarrassing faux pas at least every day. His cognitive ability is a joke. He’s ravaged by even MSNBC and CNN, which have been his biggest champions. His Afghanistan screw-up is the latest in eight months of malfeasance and scandals that bring on righteous calls for 25th Amendment challenges, impeachment charges and pleas for resignation. He’s been roasted by his former champions abroad among U.S. allies.

But the Democrats never talk about any of this. They neither see nor admit none of it.

And the person who would take over in each removal scenario is the cackling shrew Kamala Harris. It’s enough to make you queasy.

Our country has never been in more trouble, not even when Adolf Hitler and Hideki Tojo were at their peak of vanquishing freedom around the world. To have Franklin Roosevelt at the helm would be more acceptable than a fool who cannot construct a coherent sentence, or, for that matter, read a teleprompter.

Joe Biden’s poll numbers are falling precipitously, with the Afghan debacle causing his approval ratings to cross the negative threshold. Of course, his ratings should be even lower, but the American people have been dumbed down by the education establishment, doing the job only the uniparty could do!

Even discounting the two positive polls, as they rightly should be, The Hill/Harris survey, which is predictably Democratic, and the slanted Economist/YouGov poll, in the Real Murky Politics tabulation, I just can’t believe the numbers.

I don’t think the nation has a grip on censorship cabal we call Big Tech. Today America doesn’t have anything like it had when all news services, WND included, were given a fair shake! Just last week, the Gateway Pundit was demonetized. It happened to WND years ago! Who will be next?

The Democrats have the media. They have kindergarten through public high school. The colleges and universities are the finishing schools for the Democrats. They also have the foundations and corporate America locked up. The Democrats have successfully achieved market domination on propaganda, mind control and indoctrination with the help of Google, Facebook and Twitter.

This Democratic domination explains how Donald Trump could be impeached, TWICE! How he was successfully banned from Twitter and Facebook. Why he still fighting the Jan. 6 battle. How his election of 2020 was literally STOLEN!

The Democrats are shameless. Even while we witness Joe Biden’s fall from grace, they’re busy fixing the next election – while prohibiting an honest discussion of real vote fraud in the last one.

I say none of the alternatives is satisfactory. We can’t wait for the 2024 presidential election – and why should we? We’ve got to have a national debate on holding the next presidential election next year – before our nation falls. After all, we have a midterm election set up already for 2022. We just can’t wait until 2024. Their will be nothing worth saving by then.

Joe Biden is not going to last four years. What are the Democrats waiting for – a coup? Enough with the excuses and clams that we had an actual election in 2020. At least half of Americans can’t be fooled. That was a SELECTION, not an election.

The Democrats are done with free elections. The fix is in. We have to do elections in every state by the Constitution, by voting the old-fashioned way, with laws by the state legislatures, not nationalized dictates – and not under COVID rules.

We don’t need Facebook collecting ballots. And we won’t accept it. We want ballots distributed and secures by states and counties. We demand oversight by both parties.

We want one-day of voting with elections called, preferably, that night.

Is that too much to ask?

This is the United States of America – not some banana republic!