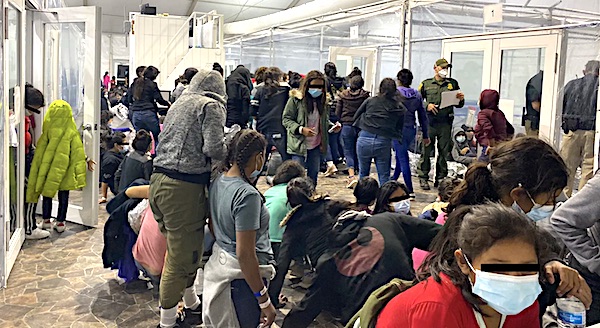 The American Center for Law and Justice has sued the administration of President Biden for refusing to answer Freedom of Information Act questions about the crisis it has allowed to develop at the southern border.

“And why did the Biden administration cancel – or ‘postpone’ – Operation Talon? Operation Talon was the Trump administration’s organized effort to target and deport known sex offenders living in the United States illegally. If there’s a reason it was canceled, the American people deserve to know it. And if there was not a reason, well, we deserve to know that, too,” the ACLJ reported.

However, the organization said, “the Biden standard when it comes to the challenges it faces seems to be ‘ignore it until it goes away.’”

“We’ve received no cooperation. At first, the Biden team acknowledged receipt of our FOIA and asked for an additional 10 days to comply, citing a heavy volume of FOIA requests coming in – we don’t doubt it – but that was the last we heard. Our FOIA was sent on April 7th, and it certainly seems they have no intention of working with us of their own volition. By the time they did try to send a noncompliant reply, it was too little too late. We had already filed our lawsuit.”

In the ACLJ report, Jordan Sekulow explained, “It seems like the Biden administration had barely moved into the White House when migrants began surging our southern border in droves. It shouldn’t be surprising, of course, as President Biden halted construction on President Trump’s wall and promised to reverse the Trump administration’s immigration policies – the ones that were working – essentially flinging open the doors and saying, ‘Come on in.’ And they have been, in unprecedented numbers.”

His report specifically cites confirmation that “two known terrorists” were apprehended at the border.

But he notes the press release about the situation “has mysteriously vanished.”

Further, there are videos “of toddlers being dropped over the wall from heights that should have stopped the heart of any parent watching…”

Still, Biden officials refuse to admit that it is a crisis.

The legal action also seeks information about Biden’s insistence there’s no “crisis,” as well as the details of the deleted press release.

The ACLJ said, “Now a federal judge will force the president’s team to cooperate with our records demands. The crisis at the border is real, it is happening right now; and if President Biden does not take swift, serious action to stop it now, it might soon be too late.”