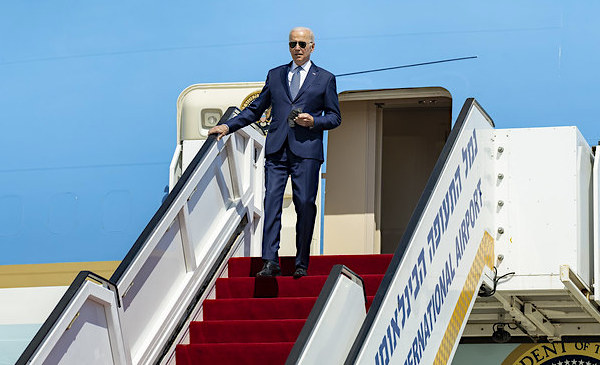 Promoting his United We Stand Summit at the White House – an event intended to “counter the corrosive effects of hate-fueled violence on our democracy and public safety” – President Biden repeated the false “very fine” people claim against former President Trump.

“I decided to run for president after Charlottesville because I believed our story is to unite as one people, one nation, one America,” Biden said on his Twitter account Thursday.

“Today, we convened a first-of-its-kind United We Stand Summit held at the White House to make that story clear.”

I decided to run for president after Charlottesville because I believed our story is to unite as one people, one nation, one America.

Today, we convened a first-of-its-kind United We Stand Summit held at the White House to make that story clear.

In fact, Trump made it clear during his remarks on the Charlottesville riot in 2017 that he was not referring to “the neo-Nazis and white nationalists” as “fine” people, explicitly declaring “they should be condemned totally.”

His reference – as a CNN contributor pointed out in a rebuke to his network colleagues – was to the people on both sides of the issue of whether or not to maintain statues of Robert E. Lee and other Confederate figures.

Biden, in one of many occasions in which he repeated the lie, said during his acceptance speech at the Democratic National Convention that Trump’s words in 2017 were “a wake-up call for us as a country” and, for him, “a call to action.”

When Kamala Harris repeated the lie during the vice-presidential debate in October 2020, then-Vice President Mike Pence rebutted her and delivered a word to media who have peddled it.

“You know, I think this is one of the things that makes people dislike the media so much in this country. That you selectively edit, just like Sen. Harris did, comments that President Trump and I and others on our side of the aisle make,” Pence said. “Sen. Harris conveniently omitted after the president made comments about people on either side of the debate over monuments, he condemned the KKK, neo-Nazis, and white supremacists, and has done so repeatedly.”

Biden, for his part, weighed in on the controversial Confederate flag issue in a 1993 Senate session, declaring that “many fine people” display it.

“In Oak Creek, Orlando, Victoria, Pittsburgh, El Paso, Atlanta, Buffalo, and in so many other communities we have seen our neighbors, our friends, our loved ones attacked simply because of who they are or where they pray,” she said.

Biden recently has labeled supporter of former President Trump as “semi-fascists” who pose a “threat to democracy,” including in a speech in front of Independence Hall in Philadelphia.

The White House event comes just weeks after Biden warned in a speech in Philadelphia that extremist Republicans are a threat to democracy.

At the summit, he pushed back against criticism that the speech was divisive.

“Silence is complicity, we can’t remain silent,” Biden said. “There are those that say we bring this up, we divide the country. Bringing it up we silence it.”