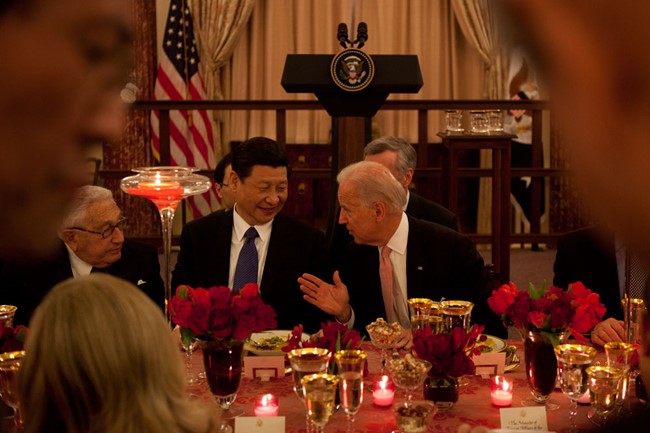 China increased purchases of U.S. goods in 2020 by 17.1 percent to $124.7 billion, U.S. Census data shows, the highest since 2017, following the U.S.-China trade deal that was brokered by former President Donald Trump in Jan. 2020 right before the Covid outbreak.

Additionally, October, November and December of 2020 were all records for the most amount of U.S. goods ever exported to China at $14.7 billion, $14.2 billion and $14.6 billion, respectively.

Into 2021, the Chinese increased purchases have continued at a combined $22.7 billion in January and February, the largest ever purchases of U.S. goods by China in those two months.

Moreover, another element of the U.S.-China trade deal was an agreement on currency for no more competitive devaluations. Beginning in the summer, the Chinese yuan strengthened dramatically against the dollar, from 7.16 yuan per dollar in June 2020 down to 6.45 per dollar in late January 2021, as Trump left office.

Overall, the U.S. dollar finally weakened from its historically high levels of strength over the same period, leading to a massive jobs rebound from the Covid recession as more than 17.4 million of the 25.3 million jobs lost have already been recovered.

China was never supposed to negotiate under duress and would certainly never agree to a deal that left the tariffs in place. Instead, even with the tariffs, China carried on the negotiation and ultimately followed through on phase one.

In other words, the trade pressure by Trump, especially the tariffs but also threatened sanctions, his art of the deal to use his leverage, worked.

And even after the deal, despite Covid and the economic wreckage that had been wrought in 2020 — and the damage is still quite considerable — the Trump-engineered trade deal with China has actually been a policy success. China has increased purchases, and seemingly allowed the yuan to strengthen — both to the benefit of the U.S.

Trump did that. And he did it without giving up any that leverage.

In Dec. 2020, then-President Elect Joe Biden told columnist Thomas Friedman he would not immediately remove the Trump tariffs: “I’m not going to make any immediate moves, and the same applies to the tariffs. I’m not going to prejudice my options.”

Even today, the tariffs remain in place. As well they should.

Despite all that has already been accomplished in terms of opening China up to U.S. goods, China is still well short of what it had promised in the 2020 deal. In 2020, China imported $100 billion of the U.S. goods agreed to in the deal, only 58 percent of the promised $173 billion, according to the Peterson Institute for International Economics.

Additionally, after strengthening against the dollar for the second half of 2020, the yuan has once again begun weakening against the dollar again, just as soon as Biden entered office, with 6.55 yuan per dollar instead of 6.45 yuan per dollar. Similarly, the U.S. dollar as a whole has begun strengthening slightly again the first quarter of 2021, threatening the recovery.

Here, Beijing could be testing Biden to see how he’ll respond. Is it still the same trade policy or not? Will Biden defend the dollar against the yuan weakening?

President Biden has an opportunity to expand on the success of the Trump administration’s trade policies, but he has to start by unequivocally saying he is leaving the tariffs on China in place, and consider even increasing them in light of the yuan’s recent weakening. The tariffs worked.

China has not yet fully implemented the agreement from 2020, and with Trump waiting in the wings to potentially run again in 2024, Biden cannot afford to unilaterally roll back the popular Trump policy on China — and certainly not without key concessions from Beijing. Biden has everything to lose — and not much to gain — if he now throws the Trump trade policy by the wayside.

This post, Biden must enforce the 2020 Trump trade deal with China to keep Beijing in check, was originally published on The Daily Torch and is republished here with permission. Please support their efforts.