Biden moves to give WHO health-care sovereignty over America 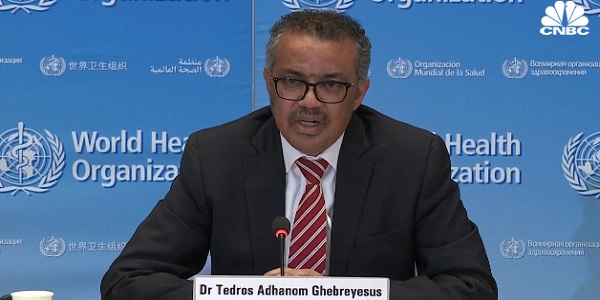 The Biden administration has proposed amendments to World Health Organization regulations that would give the U.N. agency’s director-general unilateral authority to declare a health emergency in the United States.

The International Health Regulations amendments will be subject to votes at the upcoming annual meeting of the WHO’s governing legislative body, the World Health Assembly, May 22-28 in Geneva, Switzerland, warns the acclaimed reformer in the field of psychiatry, Dr. Peter Breggin, who is helping lead a campaign to raise awareness of the Biden administration’s move.

Breggin writes that the planning for the amendments “has been so stealthy that it might have escaped attention except for the efforts of one individual,” author, researcher and activist James Roguski.

Roguski has a website through which citizens can comment to the U.S. Department of Health and Human Services – the deadline is Friday morning at 10 a.m. Eastern. A separate form allows citizens to sign a petition demanding the amendments be withdrawn.

Under the new regulations, the director-general could declare an emergency in the U.S. if he determines there is a potential health threat to other nations.

Breggin notes the existing International Health Regulations are a “binding instrument of international law entered into force on 15 June 2007.”

A graduate of Harvard and Case Western Reserve Medical School, Breggin, 86, is  known as the “conscience of psychiatry” for his criticism of the use of drugs and electroconvulsive therapy in the field. He advocates instead “more effective, empathic, and ethical forms of psychological, educational, and social approaches to people with emotional suffering and disability.”

His latest book is “COVID-19 and the Global Predators: We are the Prey, which criticizes the global pandemic response and explores who has profited from it.

The Biden administration quietly submitted the amendments to the WHO on Jan. 18, Breggin notes on his website.

Significantly, they override the current check on WHO power which states that the agency “shall consult with and attempt to obtain verification from the State Party in whose territory the event is allegedly occurring.”

“By eliminating that, and other clauses,” Breggin writes, “all the shackles will be removed from the Director-General of WHO, enabling him to declare health emergencies at will.”

Breggin warns that the “arbitrary authority to declare national emergencies will be used against the United States if our government ever again dares to take anti-globalist stands as it did under the Trump administration.”

Investigative reporter Leo Hohmann spotlights some of the other changes contained in the amendments.

They include the implementation of “regional” health czars under WHO authority who enforce the U.N. agency’s policies.

“Aid can be withheld, punishing economic sanctions can be placed on any nation that deviates from the prescribed WHO remedy for whatever health emergency has been declared by the WHO director general,” Hohmann writes.

The current director, he points out, is Tedros Adhanom Ghebreyesus, who has been criticized for allowing the Chinese Communist Party to manhandle the U.N. agency and control pandemic policies and the overall narrative, blocking investigation of COVID-19’s origin.

Act now
Breggin points out that existing WHO regulations provide for an 18-month grace period during which a nation can withdraw its “yes” vote for amendments.

However, the current proposed amendments would reduce the timeframe to six months.

“We must act now to prevent the passage of the amendments, including putting sufficient pressure on the United States to withdraw them from consideration,” Breggin writes.

“If that fails, and the amendments are approved at the May meeting of the WHO governing body, we must then make the effort to influence a majority of the nations to change their votes to ‘no.’”

A total of 47 nations support the Biden administration’s amendment, including all 27 European Union members.

Breggin points out that in the foreword to WHO’s regulations, there is no specific limit to what constitutes a health emergency, and he warns that the authority is not limited to pandemics.

The scope of authority includes an “illness or medical condition, irrespective of origin or source, that presents or could present significant harm to humans.”

In an interview Thursday with “War Room,” Breggin said the Biden administration proposals essentially make the WHO’s director-general a “dictator over health emergencies.”