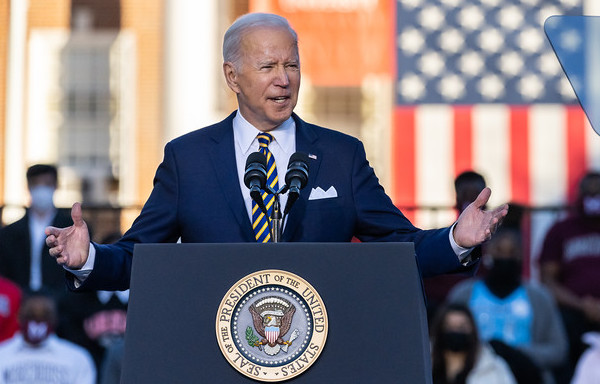 Twitter is among the media platforms taking to task “conspiracy theorists” who spotlighted President Biden’s mention in a speech that “there’s going to be a new world order.”

The Big Tech giant said “New World Order” is a trending term on the platform as “unfounded claims” are being spread. 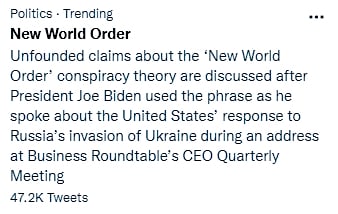 At a meeting Monday in Washington of the Business Roundtable lobbying organization, Biden declared: “Now is a time when things are shifting. We’re going to — there’s going to be a new world order out there, and we’ve got to lead it. And we’ve got to unite the rest of the free world in doing it.”

The Independent newspaper of London reported Biden “has inadvertently drawn the attention of conspiracy theorists with remarks he made at the end of a speech about the implications of Russia’s assault on Ukraine.”

The paper said the “‘new world order’ conspiracy theory dates back decades.” The British stated that the theory “holds that a nefarious elite led by the United Nations and other shadowy forces is planning to install a single transnational global government via the use of force – possibly with the involvement of US agencies including the Federal Emergency Management Agency, which some believe is preparing to put Americans in concentration camps.”

However, regardless of what Biden meant when he used the term on Monday, his administration is an advocate of the World Economic Forum, the globalist organization that calls for a “Great Reset” of capitalism and national sovereignty while boasting of regularly assembling “the world’s most powerful decision-makers.”

Biden has adopted WEF’s term “Build Back Better,” which captures the idea of a “Great Reset” of the world order in the aftermath of the pandemic.

“The notion of a reset is more important than ever before,” Kerry said. “I personally believe … we’re at the dawn of an extremely exciting time.”

Kerry, who has since been appointed Biden’s climate czar, said the rejoining of the Paris Climate Accord by Biden would help drive the “Great Reset.” But rejoining Paris is “not enough,” Kerry said.

“The Biden administration will focus on every sector of the American economy,” he said. “There will be a 2035 goal to achieve net neutrality with respect to power and production.

Kerry said the U.S. is “ready to come back in and help to lead and raise the ambition in Glasgow to accelerate this incredible capacity for a transformation in the private sector.”

Last June, the White House published a statement announcing Biden was set to meet with G7 leaders “to discuss ways to forge a more fair, sustainable, and inclusive global economy that meets the unique challenges of our time.” Among the White House initiatives toward that end is pushing for a “global minimum tax” on multinational corporations of at least 15%.

‘Capitalism as we have known it is dead’
Fact-checkers have dismissed the “Great Reset conspiracy theory,” but WEF founder and Executive Chairman Klaus Schwab made it clear in June 2020 that the COVID-19 pandemic should be exploited as an opportunity to advance the globalist agenda promoted by his Davos conferences, which have pushed for numerous proposals, such as a worldwide carbon tax, to redistribute wealth and shift sovereignty from nation states to global entities.

Schwab wrote that “the world must act jointly and swiftly to revamp all aspects of our societies and economies, from education to social contracts and working conditions” and bring about a “‘Great Reset’ of capitalism.”

At the 2021 Davos meeting, a Fortune 500 CEO affirmed WEF’s assertion that “capitalism as we have known it is dead.”

‘A new world order based on solidarity
One year ago, Pope Francis called for a “new world order” in a book titled “God and the World to Come.” He described the new order as a shift from financial speculation, fossil fuels and military build-up to a green economy based on inclusiveness.

After the coronavirus pandemic, the pope said in an excerpt of the book released by the Vatican, “the world will never be the same again.”

Francis said justice can be healed “by building a new world order based on solidarity, studying innovative methods to eradicate bullying, poverty and corruption,” with “all working together, each for their own part, without delegating and passing the buck.”

He said the world can no longer “blithely accept inequalities and disruptions to the environment.”

“The path to humanity’s salvation passes through the creation of a new model of development, which unquestionably focuses on coexistence among peoples in harmony with Creation,” he said.

Frances said the “dominant speculative mentality” of the global financial system must be reestablished with a “soul” to reduce the gap between those who have access to credit and those who do not.

“It is time to remove social injustice and marginalization,” he said. “If we seize the current trial as an opportunity, we can prepare for tomorrow under the banner of human fraternity, to which there is no alternative, because without an overall vision there will be no future for anyone.”

In his third encyclical, in 2020, the pope declared the coronavirus pandemic proved that the “magic theories” of market capitalism have failed and the world needs new systems that promote equality and unity.

Francis asserted it should be clear that it is not enough to “refine” existing systems. He charged that the “perverse” global economic system keeps the poor on the margins while enriching the few.

He opposes a right to property for individuals, contending a “social purpose” and common good must come from sharing the Earth’s resources.

In November 2018, as WND reported, progressive filmmaker Michael Moore claimed Francis told him capitalism is a sin and urged Moore to continue making his left-leaning documentaries.