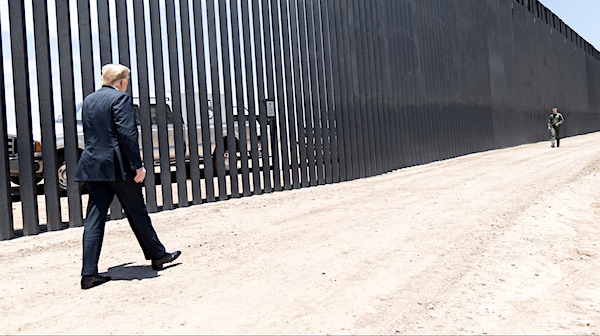 President Biden used some of his important first hours in office last winter to try to undo President Trump’s largely successful efforts at shutting off the flow of illegal aliens coming into the U.S. across its southern border.

Besides halting plans to continue building physical barriers on the border, Biden dropped President Trump’s “remain-in-Mexico” policy through which those seeking asylum remained in Mexico until hearings before a U.S. immigration court.

The U.S. Supreme Court earlier ruled that was a decision Biden mishandled, and now the president is admitting defeat and plans to reinstate it.

The Daily Mail reports the actual result now will depend on approval from the Mexican government, which has raised some issues U.S. officials say they are trying to address.

“Mexico wants cases to generally conclude within six months and ensure that asylum-seekers have timely and accurate information about hearing dates and times and better access to legal counsel,” the report explained.

President Trump introduced what officially is known as “Migrant Protection Protocols” in 2019, and it has affected some 70,000 people who otherwise might have been released into the United States pending their court hearings.

Previously, a federal judge agreed with the states of Texas and Missouri who wanted the plan restored, and ordering the Biden administration to do that.

The judge, U.S. District Judge Matthew Kacsmaryk, noted there are procedures that must be followed if Biden actually insists on ending the practice.

Mexico allowed the practice when Trump set it up, and he warned that there could be higher tariffs for a lack of cooperation.

What has followed Biden’s decision to scrap virtually all of President Trump’s border security efforts has been a crisis involving hundreds of thousands of illegal aliens drawn to the border by Biden’s changes.

The result has been border states – and even interior states – flooded with thousands of foreigners who have neither legal standing in the country nor ways to support themselves.

WND reported the U.S. Supreme Court, on a 6-3 decision, ordered the policy reinstated.

Missouri and Texas sued Biden over his changes, arguing that the way the policy changed was illegal and that it harmed both border and interior states by promoting illegal immigration.

Kacsmaryk ruled that Biden failed to abide by the Constitution and the rules and regulations adopted by Congress in making the change, specifically the Administrative Procedures Act.

Constitutional expert Jonathan Turley pointed out the decision was “only the latest of a string of losses by the Biden administration in its first six months in court.”

“Within two weeks of taking office, Biden racked up one of his first losses under the APA when he reversed Trump’s deportation order. While many are denouncing that and the most recent decision, it was precisely the attack used by Trump critics during the prior administration. Even though President Barack Obama did not satisfy APA conditions in imposing original rules, the Supreme Court enforced such procedures to reverse prior orders. During that litigation over the Trump executive orders, I repeatedly noted that the Democratic challengers in court were making arguments that would likely used against the next Democratic president in seeking to quickly undo Trump’s orders.”