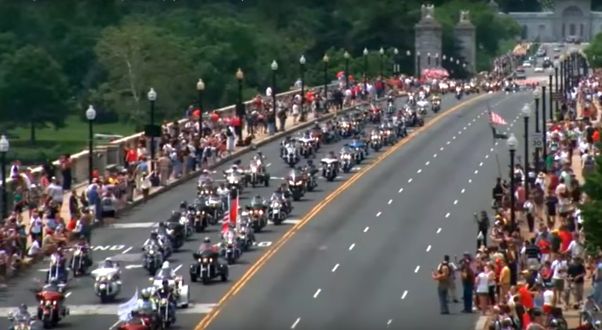 Prompting outrage in Congress, the Biden administration has canceled a permit for a Memorial Day charity event held annually in the nation’s capital for the past three decades honoring war veterans.

The Rolling to Remember motorcycle ride, formerly known as Rolling Thunder, brings scores of veterans and others to Washington, D.C., to commemorate war veterans, including prisoners of war, those missing in action and those lost every day to suicide, the Washington Free Beacon reported.

The Pentagon approved a permit in March for the group to gather in its parking lot but rescinded it this week without explanation, according to California Republican Reps. Darrel Issa and Ken Calvert.

The Defense Department is now saying the denial is due to COVID-19 restrictions.

“The Rolling to Remember event is no less safe,” Issa said. “The only difference is the politics that are denying veterans the opportunity to honor their fallen comrades. If patriotic veterans are not welcome at the Pentagon, are they truly welcome anywhere in the Biden Administration?”

Issa said Biden administration officials “refused to talk with event organizers” and “refused to respond to Congress about this topic.”

The Pentagon’s decision to deny the group a permit “leaves patriotic veterans without a safe alternative” to gather, the congressman said.

In a letter petitioning the Pentagon, Issa and Calvert noted that for decades, the Pentagon “allowed these veterans to gather in the Pentagon parking lot,  offering the participatnts a pre-parade staging area to safely line up for the solemn processional ride from the Department of Defense to the war memorials at the National Mall.”

The group has done everything asked of it, the congressman said, and all that is missing is their traditional rendezvous point.

“We urge the Department of Defense to immediately review their request for permission … so the cyclists can safely and appropriately honor our fallen and missing heroes.”