Biden accused of 'effectively siding with the jihadists' 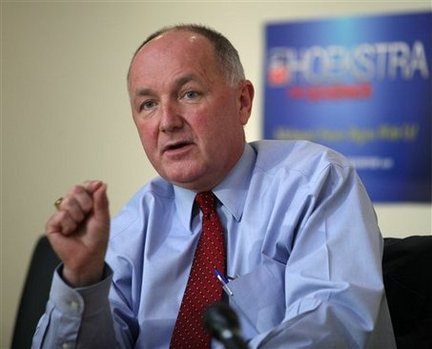 A former member of Congress and ambassador for the United States under the administration of President Trump says Joe Biden is “effectively siding with the jihadis.”

“We see it now most clearly in Afghanistan: like Obama, Biden is effectively siding with the jihadists. The results are predictably the same: disaster. We may never know if Biden made some sort of implicit deal with the Taliban,” explained Pete Hoekstra in a commentary at the Gatestone Institute.

Hoekstra is a former representative in Congress from Michigan, where he was chairman of the House Intelligence Committee. More recently he was U.S. Ambassador to the Kingdom of the Netherlands.

He continued, “Personally, I believe that the administration had at least an understanding with the Taliban. Biden probably thought he could limit the damage, but was then double-crossed by his jihadist negotiating partners. The people of Afghanistan, as we are seeing, will suffer significantly. The U.S. will be at greater risk from reinvigorated radical jihadist movements, not only the Taliban itself but also al-Qaida and ISIS, who might well now have a new home base in a Taliban-controlled Afghanistan.”

“I don’t know if Biden cares about history, but he certainly doesn’t understand it,” he said.

In Afghanistan, Biden’s abrupt pullout of American troops left the terror Taliban organization controlling the country and thousands of lives in danger.

Hoekstra explained that history is important because of the lessons it can reveal.

He explained, “The pattern is becoming more pronounced every day: instead of learning from the mistakes of the [Barack] Obama administration, many of them, by the way, his own mistakes as Obama’s vice president, Biden is following in Obama’s ill-fated footsteps. In fact, Biden’s foreign policy is so unoriginal that you could almost describe the ‘Biden Doctrine’ – as more and more left-wing pundits are calling it — as ‘Obama on steroids.’”

Hoekstra said it’s clear from “the disaster in Afghanistan” that Biden’s “doctrine” is nothing more than a supercharged Obama agenda.

It was Obama who “embraced” groups and individuals previously shunned for their links to jihadists, and also gave a major speech in Cairo to engage with the Muslim Brotherhood.

While an autocrat. Mubarak still was an ally of the U.S. and a powerful force against radical Islamism and jihadist terrorism, Hoekstra explained.

But the MB dictators there shortly later were thrown out, and that “scenario repeated itself in Libya when Obama allied with the radical groups that wanted to overthrow Gaddafi,” he explained.

Libya still lacks a functioning government, he pointed out.

Further, U.S. Ambassador Chris Stevens and two other Americans were killed in Benghazi by the Libyan terrorist group Ansar al-Sharia, he said, and “secret shipments of arms were sent from Libya to the rebels in Syria who were attempting to overthrow the government of Bashar al-Assad. Some of the groups receiving arms from Libya, with at least the tacit support of the Obama administration, became the core of what the world would come to know as ISIS.”

The worst, however, likely was Obama’s actions in Iran, where, “in pursuit of a flawed nuclear deal, Obama lifted sanctions on the radical regime of the mullahs, the largest state sponsor of terrorism in the world, with proxies wreaking havoc in Lebanon, Iraq and Yemen, to name just the most blatant examples.”

To avoid further catastrophe, he said, Biden must refuse to work with radical Islamists unless there is a case “of absolute and immediate necessity.”

Then he must engage – personally – with allies. “This must be done by the president himself, not just by the secretary of state or the vice president. Our allies’ confidence in America, and specifically this president, has been shaken severely,” he said.

And Biden must “send powerful messages of support to Taiwan, Ukraine, Israel and our allies in Asia such as Japan and Australia especially.”

“Make it clear, now that the U.S. is at a much greater risk than just a few weeks ago, that any attack against the U.S. will be met with the harshest response,” Hoekstra advised.