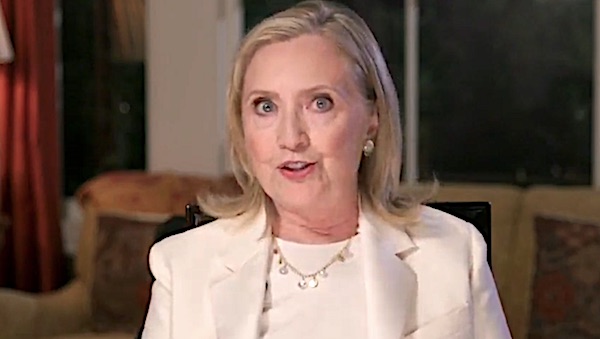 Special counsel John Durham has found explosive new evidence to support his working theory that Hillary Clinton – in an effort to deflect attention from the probe of her abuse of classified information and defeat Donald Trump – colluded with Russians and with establishment media to smear the Republican candidate with the Russia collusion hoax.

In a court filing earlier this month, Durham said the evidence in his probe of the Obama administration’s investigation of the now-debunked charge of Trump-Russia collusion is leading him to conclude that Hillary Clinton, her operatives and her campaign formed a “joint venture or conspiracy” to undermine Trump during the 2016 campaign.

Durham already has presented evidence that indicted Clinton campaign lawyer Michael Sussmann falsely told the FBI he was not working on behalf of any client when he delivered to the bureau the bogus claim that Trump had a secret communication channel with the Kremlin at the Moscow-based Alfa Bank to hijack the election. The false allegations against Trump ended up on the front pages of major newspapers citing anonymous sources familiar with the FBI probe.

Now, the Washington Times reported Tuesday, Durham has obtained evidence that undermines the last line of defense for Sussmann and the Clinton campaign: that the campaign hired the research firm Fusion GPS to do legal work, and the firm’s actions, therefore, are protected by attorney-client privilege.

Ahead of the upcoming trial of Sussmann, a former partner at the Clinton campaign’s law firm Perkins Coie, Durham obtained hundreds of emails showing employees of Fusion GPS peddled to journalists unverified allegations against Trump.

Individuals tied to Clinton’s campaign tried to keep the damning evidence from the trial by asserting Fusion GPS’ “research” for the campaign should be protected under attorney-client privilege.

And, among many more stories, was a Washington Post article about the false claim that a Trump campaign adviser was investing in Russia.

Fusion GPS was the firm that commissioned the infamous dossier of bogus, salacious claims about Trump – later shown to be sourced by anonymous Russian operatives – that was the catalyst for the Obama Justice Department’s investigation of alleged Trump-Russia collusion. Earlier this month, the Federal Election Commission fined Clinton’s 2016 presidential campaign and the Democratic National Committee for hiding its funding of the debunked dossier.

It was Sussman’s partner at Perkins Coie, senior Clinton campaign official Marc Elias, who pushed the dossier to the FBI. The document was the primary evidence presented to a secret FISA court to obtain warrants to spy on the Trump campaign.

Elias, along with Clinton campaign officials John Podesta and Robby Mook, have insisted in affidavits in the Sussmann case that Fusion GPS was hired to provide legal advice to avoid liability for defamation or libel.

But Durham argued in a court filing that if the derogatory material is privileged, Fusion GPS would have exercised caution, seeking permission or guidance from the Clinton campaign, before dishing it to reporters and the public.

The special counsel reasoned that “if the purpose of Fusion GPS’s retention was — as Mr. Elias implies — to determine the bounds of what could (and could not) be said publicly without committing libel or defamation, then the record would reflect genuine efforts to remain within those bounds.”

“And it would do so confidentially,” he added.

Wall Street Journal columnist Kim Strassel noted last Friday that top Fusion GPS executives Glenn Simpson and Peter Fritsch boasted in their 2019 book “Crime in Progress: The Secret History of the Trump-Russia Investigation” that they were hired by the Clinton campaign’s law firm Perkins Coie to dig up dirt on Trump.

That presents a problem for the campaign’s defense in the Durham probe, she pointed out.

“It’s tough for Fusion and others to claim their work product is privileged when they ladled it out to the press and agencies and profited from a book that openly describes internal discussions with Perkins Coie,” Strassel wrote.

“And that’s based upon documents, some of which — many of which are not yet declassified,” Ratcliffe said in a recent episode of “The Charlie Kirk Show.”

“We’ve known for quite some time what happened here. And what the Durham indictments are just proving is how not only complicit but the Clinton campaign did this. They literally did this,” Johnson said.

“What the Clinton campaign did in terms of political dirty tricks — we are still putting up with the repercussions,” he said. “Would Vladimir Putin have invaded Ukraine if Trump was still in office? That’s an interesting question.”