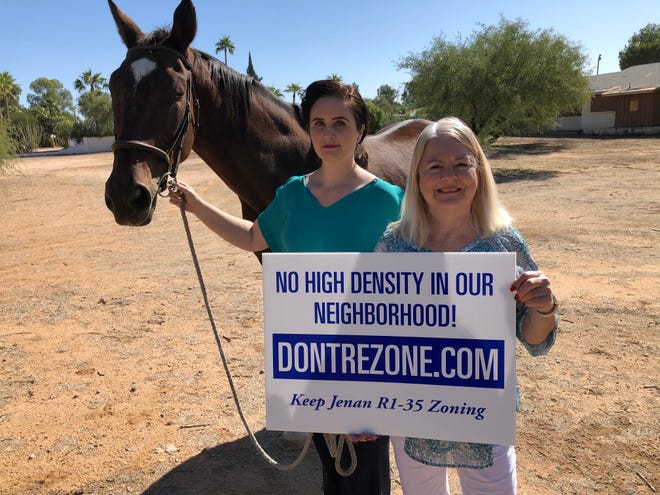 Scottsdale abandons plan that aimed to better protect horse properties in the north from dense development. Here’s why

Scottsdale leaders have dropped a plan they had hoped would better protect rural horse properties from development in northern area’s of the city after the State Land Department raised concerns.

The Phoenix area homebuilders association and limited government groups opposed the proposal, too.

While drafting a general plan for the city’s growth that is expected to go to voters in November, the City Council sought to address the density of developments in north Scottsdale, which has long been a contentious issue.

Council members had proposed creating a “Desert Rural” designation for properties in some areas, changing how the city evaluates requests for zoning changes on these properties.

The proposed designation wouldn’t have changed the number of homes that were allowed on the properties, which can vary from one per acre to one per three acres.

But it would’ve created an additional step for property owners or developers applying to build more than one house on the larger parcels. Instead of just going through a regular rezoning application, landowners in the Desert Rural areas would’ve also had to apply for a major general plan amendment.

The council only hears and acts on such applications once per year and approval requires a larger council majority, or five of seven votes.

The idea was to preserve large land parcels in these neighborhoods, in particular, equestrian lands, which the council has argued is part of the city’s identity.

But State Land Department Commissioner Lisa Atkins objected to the proposal, penning a letter to the council that said the change would decrease the area’s land values. She added the proposal would put extra burdens on property owners.

Atkins argued per the city’s current provisions, the state can seek rezoning to build 361 dwelling units on its 361 acres of state land in north Scottsdale without going through a general plan amendment. But under the Desert Rural land designation, the state would only be able to seek 120 homes unless it went through the extra step, she said.

The council sought to address Atkins’ concerns by proposing that general plan amendment applications for that area could be heard at any time and would require only a simple council majority, but she still objected.

“It is not my wish to challenge the State Land Department, or to challenge the state,” Janik, who was a supporter of the Desert Rural designation, said while recommending that council drop the proposal.

Janik asked that staff include a description of those areas in the city’s general plan, mentioning they are the city’s largest lots and many are horse properties that add to the diversity of Scottsdale.

Residents have weighed in as the city has developed its general plan over the past months. At meetings, 29 residents had supported the Desert Rural designation, while six opposed it, according to the city.

Scottsdale also received feedback from residents and stakeholders about the proposal via email.

They argued the change would benefit only a small group of individual landowners at the expense of other property owners that haven’t developed their land yet. They said that putting more restrictions on how those lots can be developed would decrease their property values and make it harder to sell.

The city also received messages supporting the proposed change from property owners in the area and the Pinnacle Canyon Homeowners Association.

Most of them said they want to preserve the feel of “the west’s most western town” by protecting rural and horse properties, which is important for tourism. Some also added that having more houses in the area would worsen traffic.

Resident Copper Phillips said increased development has impacted traffic significantly near her home in far north Scottsdale, close to the border with Carefree.

She sits in traffic for up to 10 minutes before she can make a turn at a nearby intersection, she said.

“That’s the amount of traffic in both directions. I have no idea where they’re going or where they’re coming from because theoretically there shouldn’t be that many houses to generate that kind of traffic,” she said.

Phillips said she doesn’t know what can be done to address current traffic issues but promoting lower density in that area could stop further impact.

This post, Arizona Republic: ALG Wins Fight for Private Property Rights, was originally published on The Daily Torch and is republished here with permission. Please support their efforts.