Amazon’s internet hosting service took down the website of the group of doctors known for promoting proven treatments for COVID-19 such as hydroxychloroquine and ivermectin.

America’s Frontline Doctors was accused of “hosting misinformation about vaccines and was reported as objectionable content to AWS.”

The Gateway Pundit reported Amazon shut down the site on about May 31. The doctors’ website has since been restored through another host.

Here is a copy of what AFLDS received from Amazon: 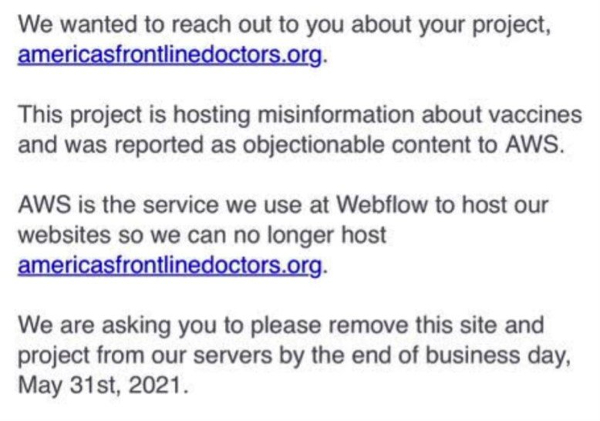 The doctors said Amazon gave them four days notice to remove the website from Amazon’s server or it would be deleted.

AFLDS said its team “frantically worked around the clock to rebuild our website from scratch while utilizing servers around the world at great expense.”

“We were forced to take immediate action because we will never allow Jeff Bezos and Amazon to censor us from speaking freely about medical treatments, medical studies, individual liberty, or challenging the government narrative surrounding COVID-19 vaccines,” AFLDS said.

The doctors said Amazon’s motives “are suspect, as they are closely aligned with the Biden Administration, due to massive government contracts” that are worth billions while Amazon pays almost no corporate taxes.

“Jeff Bezos and Amazon cannot argue with our scientific data and facts, so they would rather delete us entirely,” AFLDS said.

“We have already been blacklisted on social media, and cannot host videos on YouTube. We must build our own internet servers that cannot be silenced by Big Tech, Big Pharma, or Big Government.”

In July 2020, a video posted by America’s Frontline Doctors of a press conference in front of the Supreme Court in Washington was removed by Facebook, YouTube and Twitter after more than 10 million hits because it was deemed to have shared “misleading” claims about the virus.

In particular, the social media giants didn’t like the claims that hydroxychloroquine was an effective coronavirus treatment and that masks did not slow the spread of the virus.

But since then, more than 200 peer-reviewed studies have shown that hydroxychloroquine is a safe treatment that significantly cuts the risk of severe illness and death from COVID-19. And many studies using official data, particularly comparing states and countries with and without mask mandates, indicate masks have not slowed the spread of the novel coronavirus.

When the AFLDS video was removed one year ago, the New York Times opined the video “had been designed specifically to appeal to internet conspiracists and conservatives eager to see the economy reopen, with a setting and characters to lend authenticity.”

“Misinformation about a deadly virus has become political fodder, which was then spread by many individuals who are trusted by their constituencies,” she said.

“If just one person listened to anyone spreading these falsehoods and they subsequently took an action that caused others to catch, spread or even die from the virus — that is one person too many.”