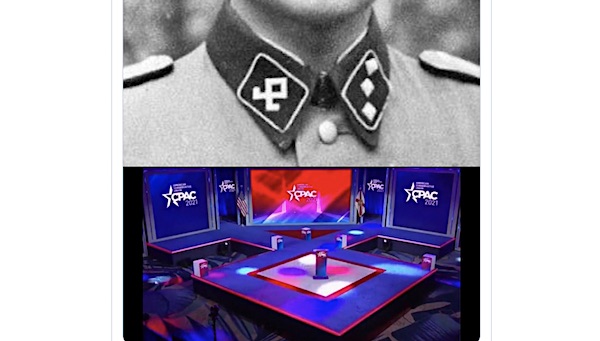 In the extremism that is today’s politics, anyone who even likes President Trump and his agenda is a Nazi.

CNN repeatedly has likened the four years of his administration to a Nazi “attack on truth,” and Israel demanded an apology after a CNN anchor compared Trump to Nazis.

An Arizona elections official responsible for the presidential vote count there even said Trump was “on the side of the freaking Nazis.”

Now, it seems, even the stages on which conservatives, including President Trump, speak are conspirators.

That’s after a social media statement from The Daily Beans Podcast charged that, “Has anyone else noticed the shape of the CPAC stage is the Odal Run/SS insignia?”

So began the “stage design conspiracy.”

That’s from American Conservative Union chief Matt Schlapp, whose organization put on the Conservative Political Action Conference at which those “Nazi” stages were used.

“Stage design conspiracies are outrageous and slanderous. We have a long standing commitment to the Jewish community. Cancel culture extremists must address antisemitism within their own ranks. CPAC proudly stands with our Jewish allies, including those speaking from this stage,” he said.

Insider reported the shape of the stage, viewed from above, was similar to one used on some Nazi uniforms.

But the symbol also is part of the runic alphabet and it is used in non-extremist contexts as well, the report said.

The Insider reported, “Runic alphabets predate the modern Roman alphabet and were used widely across Europe. They were appropriated by white supremacists due to the use of runes by Nazi Germany.”

Officials for Hyatt Hotels Corporation, at which CPAC was held in Orlando, Florido, said they abhor hate symbols as counter to their values.

“We take the concern raised about the prospect of symbols of hate being included in the stage design at CPAC 2021 very seriously as all such symbols are abhorrent and unequivocally counter to our values as a company,” the company said in a statement that was released.

The hotel organization said the ACU set up the stages.

And the back-and-forth triggered many of President Trump’s opponents to unleash once again.

Dan Rather said to watch out for those peddling the “Big Lie” and Adam Kinzinger said, “This speech is boring.”

Bill Kristol suggested people should enjoy the fact “he’s not president,” although Trump has not revealed whether he will seek the office again in 2024.