Why Did Traffic Deaths Spike As Drivers Left Roads? 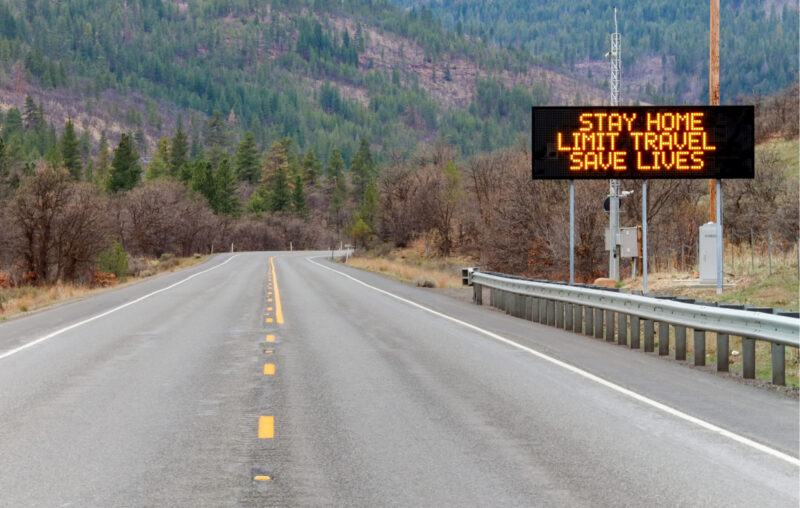 In the weeks after the attacks of September 11, 2001, many thousands of Americans took to the roads and highways in lieu of flight. Some opted to drive because their vacation or business air travel was cancelled; others because they were understandably afraid of subsequent hijackings.

Some years later, a group of Cornell University economists determined that after the terror attacks,

in the last three months of [2001] fear of flying revved up car use and caused a second toll of lives in US roads. In addition, the inconvenience of tighter airport security after 9/11 may have further encouraged substitution to road travel.

It’s tragic, but unsurprising: one would generally expect that with a sudden jump in the number of vehicles on the road, a commensurate increase in accidents would be observed. And indeed, that is what the researchers found even after taking into account “time trends, weather, road conditions, and other factors.” The additional death toll on highways as a secondary effect of the terror attacks numbered over 2,000, with many non-fatal injuries as well.

But as initially reported in early 2021 and presently congealing with additional data, the opposite is also true. Despite having driven much less owing to lockdowns–staying at home out of fear, or simply because there were less places to go and fewer things to do–the National Safety Council (NSC) estimates that over 42,000 Americans died in motor vehicle accidents in 2020.

That’s 8% more than the previous year. It’s also the highest death toll since 2007, and the first increase in four years. Worse yet, the rate of fatalities per 100 million driven miles (a normalized measure) in 2020 leapt 24% from the previous year, which is the largest annual increase since statistics began being tracked in 1924.

I myself recall vehicles flying by me on the highways last spring, passing other motorists on both the left and right shoulders, and driving over grass medians. A friend told me that one afternoon she was passed on the right by a motorcycle doing a wheelie at vastly in excess of 80 miles per hour. Throughout the first half of 2020, Facebook, Twitter, and other social media outlets seemed to evince a consistent buzz regarding the emergence of Mad Max-like driving conditions on American roads and highways.

But first: are these simply individual anecdotes? It does not appear so. Consider this June 2020 article from Fast Company, which presented conclusive data gathered from 23 million anonymized drivers:

(Although informative, the title of the article is classic Covid-era punditry: “It’s Not Just You. The Pandemic Has Made Drivers More Reckless.” There is no physiological link, ceteris paribus, between infection and an increased propensity to imperil oneself. The connection between lockdowns, stay-at-home orders, business closures and so on, meanwhile, are documented and growing.)

Individual state data confirm this. Even with a precipitous drop in total drivers, Minnesota state troopers wrote twice the number of speeding tickets for speeds exceeding 100 MPH in 2020 than in 2019. In Tucson, AZ, by July of 2020 fatal motor vehicle accidents had more than tripled, mostly between March and May when stay-at-home orders were initially imposed. In the roughly two months after California ordered lockdowns, minor crashes decreased by just under 30%, but severe, fatal injuries increased by 15%.

Inrix, a driving data analytics firm, indicates that in urban areas average speeds increased by 35% last year. So the data, national and local, aligns closely with unofficial reports. So why did accidents rise as drivers left roads en masse?

An initial hypothesis was that the leap in driving accidents and deaths occurred as nonpharmaceutical interventions were being dialed back. In other words, in the late summer and early fall of 2020, having lost all of spring and early summer, Americans surged back onto roadways with aplomb and, consequently, recklessness. But this is disproven by National Safety Council data as well, which shows that in April 2020, when state and Federal pandemic policies were both at their strictest and most widespread that the number of total miles driven on US highways had dropped by a whopping 40%, yet a 36% surge in fatalities on a per-mile basis occurred.

Another hypothesis is that people willing to leave their homes during a pandemic are likely risk takers anyway, and should thus be expected to create unsafe road conditions. But while there may be a grain of truth to this, this explanation mostly revels in spuriousness. Reasons to leave one’s home during a pandemic are innumerable, whether quarantines/lockdowns are imposed, recommended, or nonexistent.

The fact that police were reluctant to stop all but the most flagrant speeders during the spring of 2020 (“Don’t pull anyone over unless you have to.”) factors in as well.

In places where the pandemic responses were even more stringent, analyses of the instinct to get behind the wheel were proportionally incisive. In Australia, which has been a veritable fount of Covid-19 overreaction (to this very day), the initial bundle of nonpharmaceutical interventions included a ban on “nonessential drives.” As an Australian editorial opined,

You may have heard that police across Australia are starting to crack down on people ‘blatantly going for a drive.’ They’re handing out insane fines varying between $1300 and $1600…all because a driver was in their car and driving without a valid destination. Let’s just put this in perspective for a second. Right now in our country if you go for a drive without a destination deemed essential, police have the authority to fine you an obscene amount of money. That’s even if you never get out of your car, which means the chances of being exposed to another human or the Coronavirus are infinitesimally small. Adding an extra dimension to why this is completely absurd, consider [that] you can go out for exercise to maintain your physical state with one other person…But you can’t go for a drive – even on your own.

The writer continued: “At a time where coffee shops, clubs, bars and essentially all social venues and outings are banned…these drives are absolutely essential to our mental health.”

Driving anywhere is foremost an individual act of conveyance. In life and art it represents freedom, choice, or escape. Decades after America’s auto production supremacy, with more complicated lives and more sophisticated distractions, getting behind the wheel for any amount of time remains an act of personal independence.

A destination-free drive is for many a liberating experience. Yes, it’s frankly stupid to drive 100 MPH, weave aggressively in and out of traffic, and otherwise put oneself and others at risk. But the expectation that human beings would sit at home idle, unemployed, in some cases alone, completely satisfied by current video streaming options or dusty ‘70s board games, is the type of lunacy only a tax-fed bureaucrat could conjure.

Policies tend to be about the quickest, most direct route to an outcome. Human life–and in particular modern life, of which driving is a major component–is about the journey. That individuals who may have been approaching their wit’s end would get back on the road to capture a shred of pre-pandemic normalcy is unsurprising. Also predictable is that some would, unwisely, take advantage of less congestion.

And in case this seems like a sentimental take, without economic implications: the cost of fatal and otherwise severe accidents in 2020, the cascade of which occurred during lockdowns, is estimated at $474 billion. And with almost 5 million injuries stemming from those accidents, there are additional, unseen costs: livelihoods inexorably altered due to lost transportation and serious injuries. Higher insurance costs. And all of those costs collide with higher auto repair costs, which in turn are being caused by supply chains desperately struggling to regain their pre-pandemic capacities.

More traffic on the road: more accidents. Less traffic on the road: more accidents. The circumstances surrounding each are different, of course, but vindicate the contention that everything around us, every facet of our networked, interactive existences, is precariously balanced. Perturbations, large or small, and whether deriving from natural or manmade interposings may and do lead to upheaval. The social fabric is pervasive but shockingly attenuated, and there are inevitable human and economic costs to deranging it.

This article, Why Did Traffic Deaths Spike As Drivers Left Roads?, was originally published by the American Institute for Economic Research and appears here with permission. Please support their efforts.