What Is an FTX? 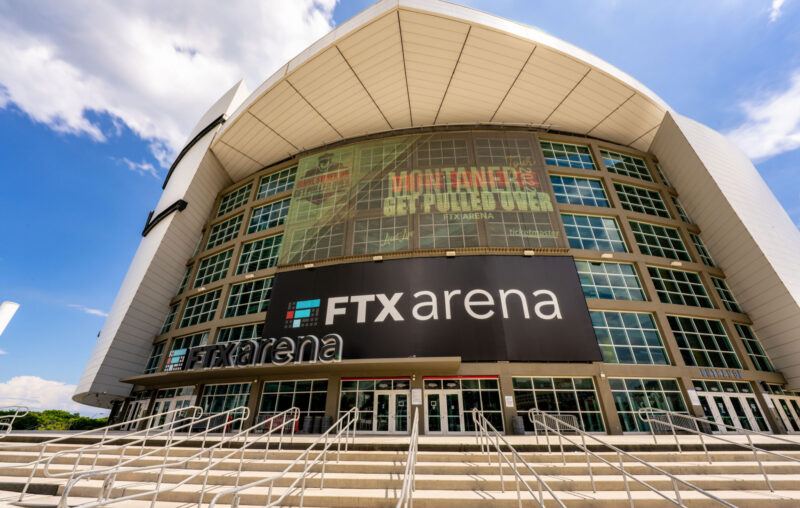 Sometimes things line up. For example, I spent my Tuesday morning teaching my students about bank runs. After class, I got to watch a bank run in real time. And so I decided to tell you about it.

You might be familiar with FTX. The firm was created in 2019 and the letters are everywhere. If you watch Major League Baseball, you might see umpires wearing FTX patches on their shirts. If you watch the NBA, you might have noticed that the Miami Heat play in an arena named after FTX. The company has a lot of celebrity ambassadors like Tom Brady and his soon-to-be ex-wife, Gisele Bundchen. You might also know the guy who runs it, Sam Bankman-Fried, who is famous for his wild hair, generally unkempt look, and the fact that he seems to do financial news interviews in a bean bag chair. He also seems to play a lot of video games.

Given all of this information, you can probably figure out what FTX does without my telling you, but I’m going to tell you anyway. FTX is a cryptocurrency exchange. You sign up for an account and you can buy and sell cryptocurrency to your heart’s delight (or to get heartburn, it is actually not clear).

Bankman-Fried, or SBF as he is almost universally known, also created a company called Alameda Research. This company is a trading firm and this is probably the most important aspect of the story.

SBF controls both FTX and Alameda. Yet, the relationship between the two has always been, let’s just say, opaque. Although it is still unclear, the most straightforward way to interpret the events of the past few days is that they were explicitly co-mingling funds. But before we get into that, let’s think about how all of this works.

If you think about a cryptocurrency exchange, it is pretty simple to think about the business model. The exchange stands ready to buy and sell cryptocurrency. Every dollar and every crypto token in a customer’s account should be backed by a dollar and a crypto token on the asset side of the exchange’s balance sheet. The company charges a transaction fee. The transaction fees are how the firm generates revenue.

Of course, the exchange could also do other things. People could, for example, borrow and buy cryptocurrency with their borrowed money. Someone deposits $5 and says, “I want to buy $10 worth of this cryptocurrency.” To do that, the exchange needs to have $10 to buy the cryptocurrency, but the customer only gave $5. So the exchange has to borrow $5. Conceivably, the firm can borrow on better terms than individuals, and earn income from the interest rate differential.

This also creates all sorts of risk. What happens if the cryptocurrency goes down in price? Well as long as it can be sold for more than $5, the exchange is fine. But what happens if the price of the cryptocurrency crashes rapidly such that the position is liquidated below $5. In this case, both the exchange and the customer take a loss. The exchange has to pay the $5 back plus interest even though it liquidated the asset for less than $5.

To deal with this risk, one thing that you could do is make sure that you have extra cash on hand. In addition, you could make sure that you are financed with a lot of equity (limit your leverage). Thus, when the firm takes losses as in the example above, it can pay back its own loan with the proceeds from the sale plus some of the cash it has on hand. The loss is borne by the shareholders, not the other account holders.

Another thing that you could try to do is hedge your position. If the exchange does this, however, it puts its customers at risk. If the company isn’t properly hedged, then the exchange could become insolvent. Customers lose money.

As I said before, the relationship between Alameda and FTX was a bit opaque. The two entities obviously have different names, but there is a question of how separate they really are. For example, it is possible to have two entities that exist separately from one another as I described. It is also possible, however to have two entities that effectively operate as one. The primary difference is that in the latter scenario, the customers are unwillingly providing funding to a hedge fund that looks like a separate entity, but really isn’t. Their funds are at risk in a way that would not be true if there was a clear divide between the firms.

But it gets more complicated. This is crypto and because it is crypto, FTX also had to have a token. It is a sort of unwritten rule. Even if you operate like a normal exchange and have nothing to do with a blockchain other than for deposits and withdrawals from your company’s crypto wallets, you have to have a token. Who would even take you seriously if you didn’t have a token? So FTX had its own token, the FTT token. This is where the chaos begins.

The FTT token was created for use within FTX. Why would anyone want this token? Well, the short answer is that anyone who held the token was entitled to discounts on trading fees at FTX. Also, because its price fluctuates, it provides people with another token on which to speculate.

The existence of the FTT token combined with the opacity of the relationship between Alameda and FTX is crucial to the story. The reason that the token is essential is that on November 2, the Alameda balance sheet was leaked to a crypto news site called CoinDesk (you can read the story here).

If you know how to read a consolidated balance sheet, you know that the equity of the firm is the difference between the assets of the firm and its debt. Thus, when asset values fluctuate, the gains or losses accrue to the shareholders who own that equity. Losses on the asset side of the balance sheet reduce the value of the equity. If losses are big enough, they wipe out all of the equity and the firm is insolvent. That means that even if it sold off all of its assets, it couldn’t pay back all of its debt.

The interesting thing about the leaked balance sheet is that Alameda had $14.6 billion in assets. On the liability side was $7.4 billion in debt. Thus, the firm had net equity of around $7 billion. Just as important was the fact that the asset side of the balance sheet included $3.66 billion of FTT tokens and $2.16 billion of FTT collateral. In other words, a significant chunk of the firm’s equity was FTT tokens, which is just a made-up token that has no use case or value outside of FTX.

As a result, if everyone were to wake up one day and decide that, “actually, these FTT tokens are pretty worthless” and tried to sell them, the price would decline quite rapidly. Possibly, the price would go all the way to zero. This is a big problem because that would wipe out most of Alameda’s equity.

Whether this is a big deal or not for the customers of FTX depends on the relationship between Alameda and FTX. If Alameda was just lending money to FTX, an Alameda insolvency would not affect FTX or its customers. Alameda would simply shut down and the people holding its liabilities would lose money. This is the simple scenario.

Another scenario is that if Alameda was using these FTT tokens as collateral for loans and the price declined significantly, then they might get margin called. This would require liquidating other assets in order to meet the margin call. Unfortunately for Alameda, most of their other assets are in cryptocurrency like Solana’s SOL token. In fact, many of the SOL tokens were “locked.” The corresponding fire sale that would be required to meet the margin call would increase the likelihood of Alameda becoming insolvent even if the falling value of the FTT tokens alone did not.

Again, if the line between Alameda and FTX was not clear, all of this could put FTX and its customers at risk.

But remember, this only matters if they are co-mingling funds and if everyone wakes up one day and says “you know, this token is worthless, maybe I should sell it.” And what are the odds of that?

It turns out that Changpeng Zhao, or “CZ”, the founder and CEO of another cryptocurrency exchange called Binance, was holding quite a lot of FTT tokens. Binance was actually an early investor in FTX. As FTX grew, Binance decided to divest its ownership. Part of the buyout that was given to Binance was paid in FTT tokens.

Recently, SBF and CZ have had a fairly antagonistic relationship. SBF fancies himself an intellectual and a policy wonk. Recently, he has been tweeting and writing about crypto regulation. He’s also been donating a lot of money to politicians, talking to policymakers, and trying to convince them to adopt crypto regulation that would benefit FTX and harm firms like Binance (which itself has faced questions about where the business is domiciled and there are rumors about CZ’s possible affiliation with the government in his birth country of China). SBF had even taken to Twitter to mock CZ about coming to Washington, DC to discuss policy, implying that CZ might not be allowed to come to DC.

So, on November 6, Zhao woke up and thought “you know, maybe all these tokens they gave me are worthless” and decided to sell $500+ million worth of FTT tokens. Maybe he always knew it was worthless and was just waiting for the optimal time to dump it. Maybe he had no intention of dumping it until he saw the Alameda balance sheet. Maybe he was the one who leaked the balance sheet. Who really knows? In any event, he said that this was just proper risk management in light of the information that had recently been made public (which is not wrong!).

This sort of magnitude of sell pressure would obviously cause the price of FTT tokens to fall quite dramatically. This is not only because it might be difficult to find buyers for this many tokens, but the very expectation that the price of this worthless token was going to fall might be sufficient to create even more selling as people try to sell before Zhao’s tokens hit the market.

It quickly became apparent that Alameda had been using these tokens as collateral for loans because they offered to buy these tokens back for $22 — an oddly specific, lower price than the then-current market price. This didn’t work and the price broke the $22 level. Meanwhile, Bankman-Fried was claiming that everything was fine and that a competitor was spreading false rumors. However, by the next day, there were reports that customers of FTX.com were experiencing difficulties with withdrawals. At that point, it became evident that Alameda and FTX (at least its international entity) must have been co-mingling funds. Then, on November 8, in a startling turn of events, SBF and CZ announced that Binance had signed a non-binding letter of intent to buy FTX.com, pending due diligence.

However, as I’m writing this, news is breaking that Binance has backed out of the deal to purchase FTX. Thus, it appears that this is not over and that things are about to get a lot worse. But now you know what happened and why.

This article, What Is an FTX?, was originally published by the American Institute for Economic Research and appears here with permission. Please support their efforts.