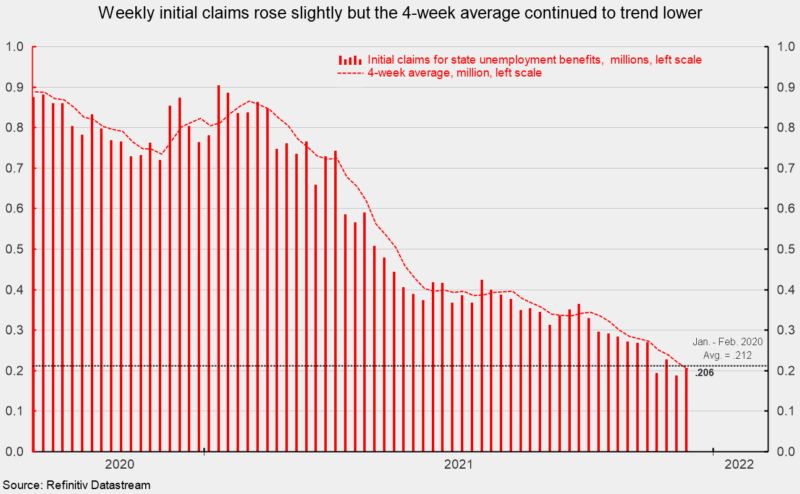 Initial claims for regular state unemployment insurance rose slightly in the latest week, rising to 206,000 for the week ending December 11, an increase of 18,000 from the previous week’s revised tally of 188,000 (see first chart). The latest result remains below the average of January and February 2020, before the government shutdowns.

The current four-week average fell for a tenth consecutive week, coming in at 203,750, a drop of 16,000 and the lowest level since before the pandemic. The results suggest the labor market remains extremely tight.

The number of ongoing claims for state unemployment programs totaled 1.960 million for the week ending November 27, a rise of 403,147 from the prior week (see second chart). State continuing claims have risen in three of the past five weeks.

Continuing claims in all federal programs totaled just 498,040 for the week ending November 27, an increase of 107,674 (see second chart). The gain was concentrated in the Pandemic Unemployment Assistance program and the Pandemic Emergency UC program, which accounted for 93,338 of the 107,674.

The latest results for the combined Federal and state programs put the total number of people claiming benefits in all unemployment programs, including all emergency programs, at 2.458 million for the week ended November 27, a rise of 510,808 from the prior week and also the third increase in the last five weeks (see second chart).

Initial claims rose in the latest week but remain extremely low by historical comparison. The low level of claims and high number of open jobs suggest the labor market remains very tight. Continuing labor shortages, along with materials shortages and logistical issues, are likely to continue to hamper production across the economy, sustaining upward pressure on prices. Eventually, supply will rise to meet demand but in the interim, price pressures are likely to remain elevated.

This article, Weekly Initial Claims for Unemployment Benefits Ticked Up but Remain Very Low, was originally published by the American Institute for Economic Research and appears here with permission. Please support their efforts.