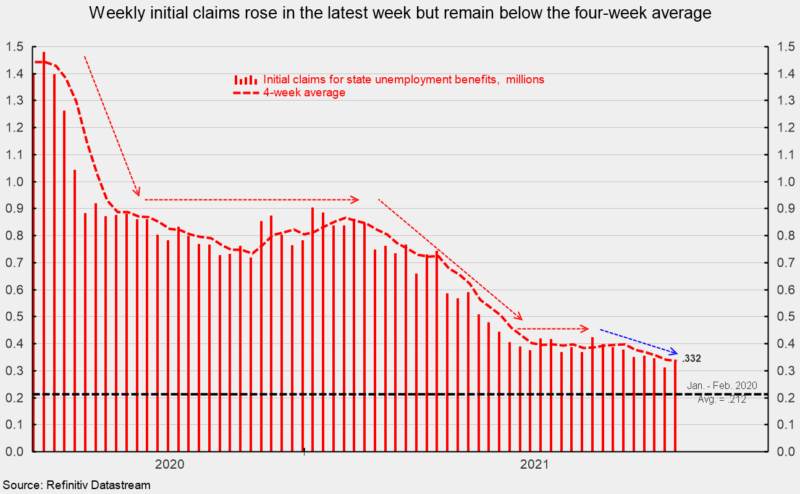 Initial claims for regular state unemployment insurance totaled 332,000 for the week ending September 11, a rise of 22,000 from the previous week’s revised tally of 310,000 (see first chart). Initial claims have declined in six of the past eight weeks.

The four-week average fell 4,250 to 335,750, the lowest of the pandemic. Economic activity continues at a solid pace and a record number of openings continue to be reported across many industries, suggesting that layoffs are likely to trend lower.

The recent surge in the number of Covid cases continues to cloud the outlook for economic growth. Furthermore, the combination of labor shortages and rising Covid cases may exacerbate materials shortages as well as logistical problems and sustain upward pressure on prices in the short term.

The number of ongoing claims for state unemployment programs totaled 2.657 million for the week ending August 28, a drop of 6,097 from the prior week. That is the 23rd consecutive week below 4 million and the sixth below 3 million since the start of the pandemic (see second chart).

Continuing claims in all federal programs totaled 9.450 million for the week ending August 28, a rise of 185,034. Still, that is the 16th consecutive week that Federal continuing claims have been below 12 million and the ninth week below 10 million. However, it is also the third increase in the last four weeks (see second chart).

The latest results for the two programs put the total number of people claiming benefits in all unemployment programs, including all emergency programs, at 12.107 million for the week ended August 28, a gain of 178,937 from the prior week. The result is the 18th consecutive week below 16 million but is also the fifth week in the past seven above the 12 million mark, averaging 12.155 million over that period (see second chart).

The labor market remains tight as weekly initial claims for unemployment benefits trend lower and the number of open jobs hit a new record high in July. Employers are having a hard time filling positions and retaining workers, especially in low-wage jobs in hospitality and retail. The recent surge in new Covid cases creates uncertainty and likely contributed to the weak August jobs report. Businesses and consumers are adapting to the new Covid world but the waves of new cases will continue to create uncertainty for the economic outlook.

This article, Weekly Initial Claims for Unemployment Benefits Rose but the Four-Week Average Fell, was originally published by the American Institute for Economic Research and appears here with permission. Please support their efforts.