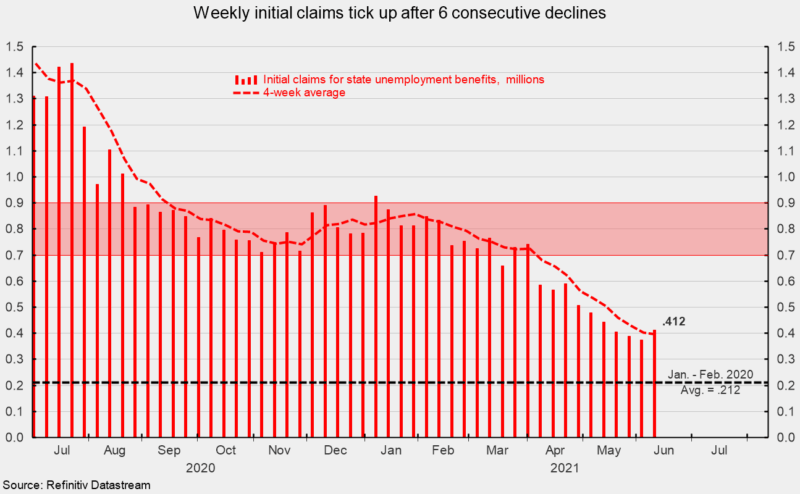 Initial claims for regular state unemployment insurance totaled 412,000 for the week ending June 12, an increase of 37,000 from the previous week’s tally of 375,000 (see first chart). The current result is the first increase following six consecutive declines. Weekly initial claims have declined significantly over the past few months but remain close to double the pre-pandemic average. Despite the weaker results, most other data suggest a strengthening labor market and positive outlook for the economy.

The four-week average fell 8,000 to 395,000, the 10th consecutive decline and the 19th drop over the last 20 weeks. Initial claims are likely to continue trending lower as the economy reopens and activity levels return to normal.

The number of ongoing claims for state unemployment programs totaled 3.309 million for the week ending May 29, a drop of 167,101 from the prior week. The latest reading is the 10th consecutive week below 4 million (see second chart).

Continuing claims in all federal programs totaled 11.520 million for the week ending May 29, a decrease of 392,772. The latest result is the third consecutive week that Federal continuing claims have been below the 12 to 16 million range (see second chart).

The downward trend in both Federal and state continuing claims puts the total number of people claiming benefits in all unemployment programs including all emergency programs at 14.829 million for the week ended May 29, down 559,873 from the prior week and the fifth consecutive week below 16 million (see second chart).

This article, Weekly Initial Claims for Unemployment Benefits Rise While Continuing Claims Fall, was originally published by the American Institute for Economic Research and appears here with permission. Please support their efforts.