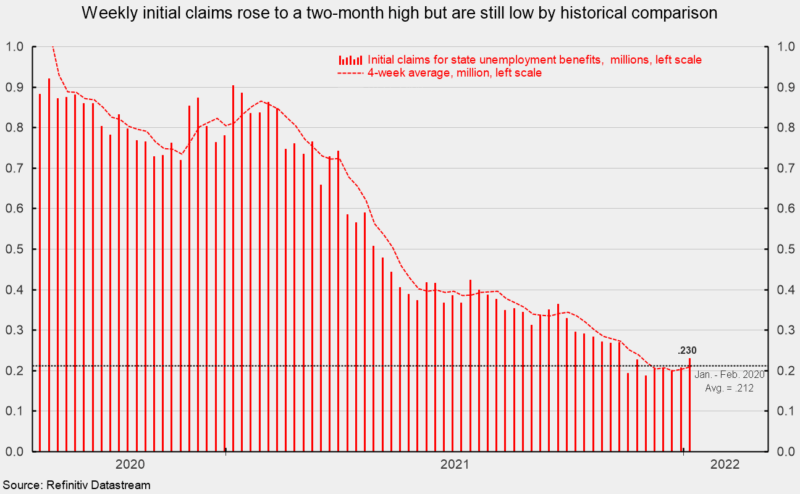 Initial claims for regular state unemployment insurance increased by 23,000 for the week ending January 8, coming in at 230,000 (see first chart). The latest result is the second increase in a row and fourth in the last five weeks. Still, by historical comparison, claims remain very low.

The four-week average also rose in the latest week – the third increase in the last four weeks – coming in at 210,750, a rise of 6,250. Despite the increases in weekly initial claims, the data suggest the labor market remains extremely tight.

The number of ongoing claims for state unemployment programs totaled 1.865 million for the week ending December 25, a rise of 230,919 from the prior week (see second chart). State continuing claims have been below 2 million for 11 consecutive weeks.

Continuing claims in all federal programs totaled just 83,195 for the week ending December 25, a decrease of 4,655 (see second chart). For January and February 2020, the average for Federal continuing claims was 34,174. Though the current numbers are above the pre-pandemic average, the results are just a fraction of the 16.6 million peak and largely reflect the end of the emergency Pandemic Unemployment Assistance program and the Pandemic Emergency UC program.

The latest results for the combined Federal and state programs put the total number of people claiming benefits in all unemployment programs at 1.949 million for the week ended December 25, a rise of 226,264 from the prior week, breaking a string of three consecutive declines (see second chart).

Initial claims appear to have stabilized at an extremely low level by historical comparison. The low level of claims combined with the high number of open jobs suggest the labor market remains very tight. Continuing labor shortages, along with materials shortages and logistical issues, are likely to continue to hamper production across the economy, though some recent data suggest businesses may be making some progress on reducing constraints on production. However, the current wave of new Covid cases could be a contributing factor to the rise in claims in the latest week and could be a threat to further increases in production.

This article, Weekly Initial Claims for Unemployment Benefits Rise to the Highest Level Since November, was originally published by the American Institute for Economic Research and appears here with permission. Please support their efforts.