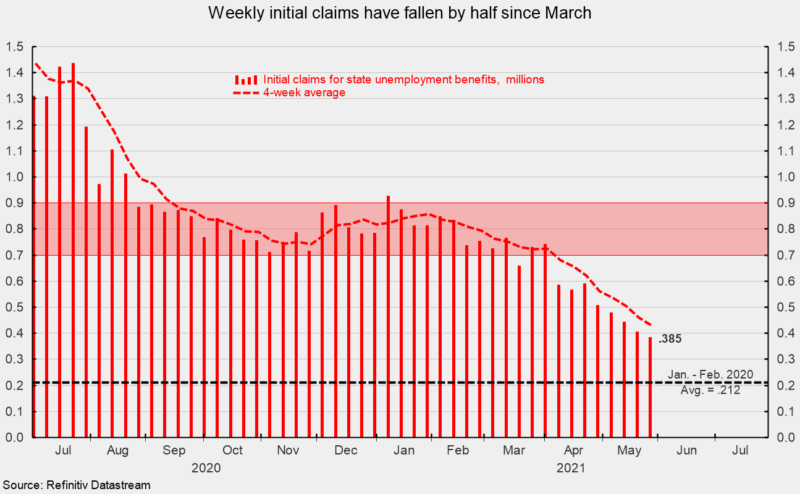 Initial claims for regular state unemployment insurance totaled 385,000 for the week ending May 29, a decrease of 20,000 from the previous week’s tally of 405,000 (see first chart). The current result is the fifth consecutive decline and the seventh in the last eight weeks. Weekly initial claims are now less than half the number just 11 weeks ago, on March 13. The favorable results are a further indication of the strengthening labor market and overall economy.

The four-week average fell 30,500 to 428,000, the eighth consecutive decline and the 16th drop over the last 17 weeks. Initial claims are likely to continue trending lower as the combination of vaccine distribution and easing government restrictions on consumers and businesses support rising economic activity.

The number of ongoing claims for state unemployment programs totaled 3.453 million for the week ending May 15, a drop of 191,781 from the prior week. The latest reading is the eighth consecutive week below 4 million (see second chart).

Continuing claims in all federal programs totaled 11.982 million for the week ending May 15, a decrease of 174,397. The latest result is just the second time Federal continuing claims have dipped below the 12 to 16 million range since May 30, 2020 (see second chart).

The downward trend in both Federal and state continuing claims puts the total number of people claiming benefits in all unemployment programs including all emergency programs at 15.436 million for the week ended May 15, down 366,178 from the prior week and the third consecutive week below 16 million (see second chart).

Pandemic Performance: AOC Masks up for Photo with Supporters