Weekly Initial Claims for Unemployment Benefits May Be Plateauing Again 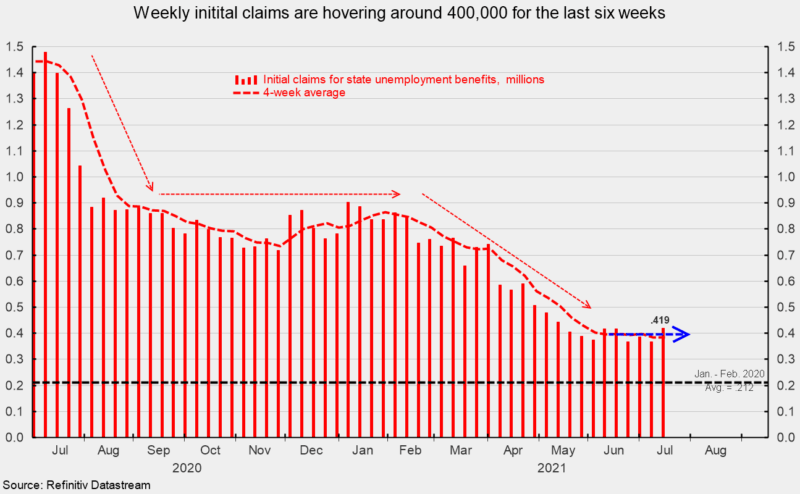 The four-week average rose 750 to 385,250, the third increase in the past five weeks. However, the four-week average for initial claims came in below 400,000 for the sixth consecutive week. While labor shortages continue across many industries, labor force participation remains low making filling jobs more difficult. Furthermore, the Delta variant is raising concerns and boosting uncertainty.

The number of ongoing claims for state unemployment programs totaled 3.126 million for the week ending July 3, a drop of 114,711 from the prior week. The latest reading is the 15th consecutive week below 4 million (see second chart). However, the average decline over that period is just 63,003.

Continuing claims in all federal programs totaled 9.448 million for the week ending July 3, a decrease of 1,148,104. The latest result is the eighth consecutive week that Federal continuing claims have been below the 12 to 16 million range and the first time below 10 million since the initial surge in claims (see second chart).

The trends in Federal and state continuing claims put the total number of people claiming benefits in all unemployment programs, including all emergency programs, at 12.574 million for the week ended July 3, down 1,262,815 from the prior week. This is the tenth consecutive decline, the tenth consecutive week below 16 million, and the first week below 13 million since April 2020 (see second chart).

This article, Weekly Initial Claims for Unemployment Benefits May Be Plateauing Again, was originally published by the American Institute for Economic Research and appears here with permission. Please support their efforts.