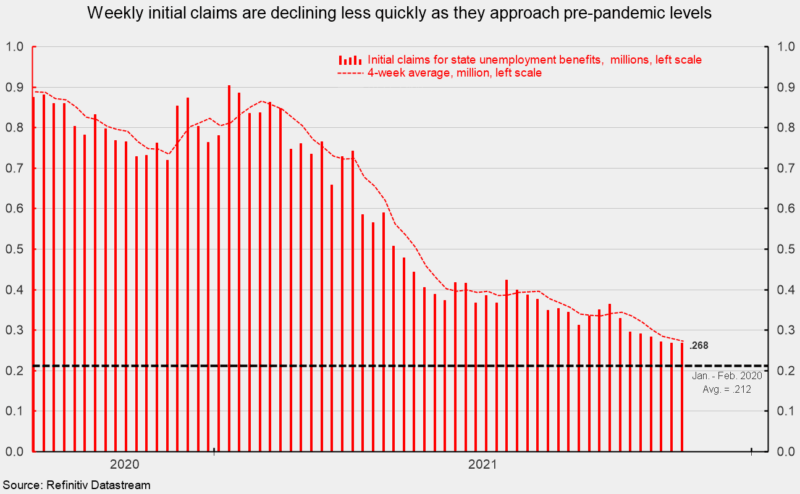 Initial claims for regular state unemployment insurance fell to 268,000 for the week ending November 13, a drop of 1,000 from the previous week’s tally of 269,000 (see first chart). The latest data is the seventh drop in a row, and the 13th decline in the last 17 weeks; it is also the lowest level of the recovery and the sixth in a row below 300,000. However, the average decline over the last five weeks is just 5,600 as initial claims approach the pre-pandemic average of about 212,000 (see first chart).

The four-week average fell for a sixth consecutive week, coming in at 272,750, also the lowest level of the recovery. The average weekly decline over the last six weeks is 12,000.

The number of ongoing claims for state unemployment programs totaled 1.946 million for the week ending October 30, a rise of 68,092 from the prior week. The increase breaks a string of six consecutive weekly declines. Before the pandemic, state continuing claims were just over 2 million (see second chart).

Continuing claims in all federal programs totaled 1.238 million for the week ending October 30, an increase of 550,712 (see second chart). The jump was largely the result of an increase of 537,467 in the Pandemic Unemployment Assistance program. For the latest week, 41 states reported 791,060 continued weekly claims for Pandemic Unemployment Assistance benefits and 43 states reported 272,974 continued claims for Pandemic Emergency Unemployment Compensation benefits.

The latest results for the combined Federal and state programs put the total number of people claiming benefits in all unemployment programs, including all emergency programs, at 3.185 million for the week ended October 30, a gain of 618,804 from the prior week (see second chart).

Initial claims may be establishing a flatter trend as the level approaches pre-pandemic levels. Overall, the labor market remains tight, as labor shortages, along with materials shortages and logistical issues, continue to hamper supply across the economy, driving up prices. Eventually, supply will rise to meet demand but in the interim, price pressures remain elevated.

This article, Weekly Initial Claims for Unemployment Benefits Hold at a Low Level, was originally published by the American Institute for Economic Research and appears here with permission. Please support their efforts.