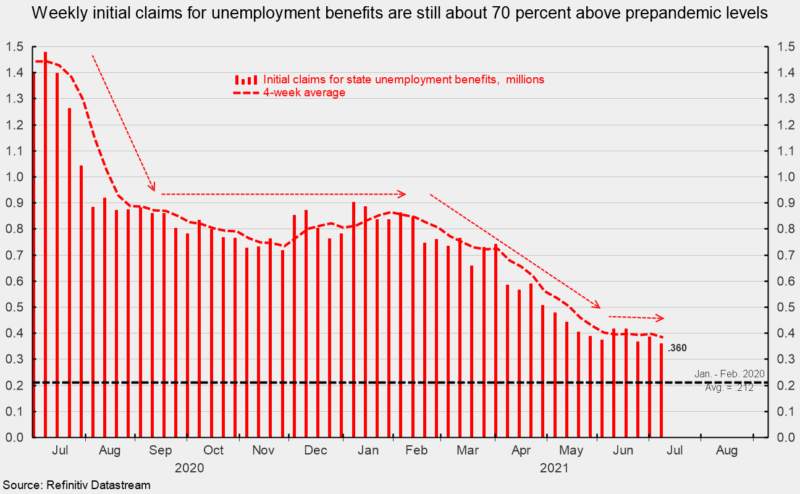 Initial claims for regular state unemployment insurance totaled 360,000 for the week ending July 10, a drop of 26,000 from the previous week’s tally of 386,000 (see first chart). The current result is the third in a row and fifth in the last seven weeks that initial claims were below 400,000. However, the average change over the last five weeks is just -2,800. Furthermore, the current level is almost 70 percent above the prepandemic average of 212,000.

The four-week average fell 14,500 to 382,500, the 12th decline in the past 14 weeks and the 20th drop over the last 23 weeks. The four-week average for initial claims came in below 400,000 for the fifth consecutive week but the pace of decline has also slowed. Initial claims are likely to continue trending lower as the economy fully reopens and activity levels continue to rise.

The number of ongoing claims for state unemployment programs totaled 3.241 million for the week ending June 26th, a drop of 21,082 from the prior week. The latest reading is the 14th consecutive week below 4 million (see second chart). However, the average decline over that period is just 59,311.

Continuing claims in all federal programs totaled 10.596 million for the week ending June 26th, a decrease of 351,197. The latest result is the seventh consecutive week that Federal continuing claims have been below the 12 to 16 million range (see second chart).

The trends in Federal and state continuing claims puts the total number of people claiming benefits in all unemployment programs, including all emergency programs, at 13.837 million for the week ended June 26th, down 372,279 from the prior week. This is the ninth consecutive decline, the ninth consecutive week below 16 million, and the first week below 14 million since April 2020 (see second chart).

This article, Weekly Initial Claims for Unemployment Benefits Fell but Remain Elevated, was originally published by the American Institute for Economic Research and appears here with permission. Please support their efforts.