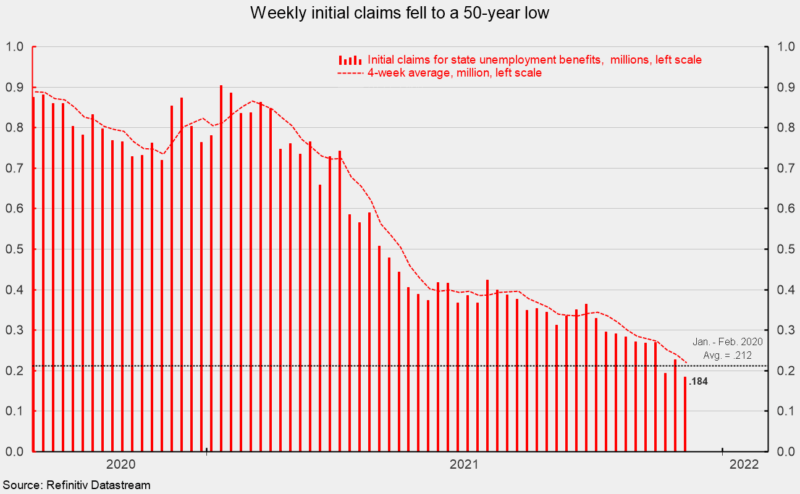 Initial claims for regular state unemployment insurance fell sharply in the latest week, dropping to 184,000 for the week ending December 4, a drop of 43,000 from the previous week’s revised tally of 227,000 (see first chart). The latest result is the lowest level since September 6, 1969.

The current four-week average fell for a ninth consecutive week, coming in at 218,750, the lowest level since March 7, 2020. The results suggest the labor market remains extremely tight.

The number of ongoing claims for state unemployment programs totaled 1.557 million for the week ending November 20, a drop of 258,394 from the prior week. That is the lowest result since November 22, 2019 (see second chart).

Continuing claims in all federal programs totaled just 390,379 for the week ending November 20, a decrease of 92,133 (see second chart). The drop was concentrated in the Pandemic Unemployment Assistance program and the Pandemic Emergency UC program, which accounted for 79,485 of the 92,133.

The latest results for the combined Federal and state programs put the total number of people claiming benefits in all unemployment programs, including all emergency programs, at 1.948 million for the week ended November 20, a drop of 350,527 from the prior week and the lowest level since December 20, 2019 (see second chart).

Initial claims fell in the latest week, hitting the lowest level in more than 50 years. The low level of claims and record-high number of open jobs suggest the labor market remains very tight. Continuing labor shortages, along with materials shortages and logistical issues, are likely to continue to hamper production across the economy, sustaining upward pressure on prices. Eventually, supply will rise to meet demand but in the interim, price pressures are likely to remain elevated.

This article, Weekly Initial Claims for Unemployment Benefits Fall to the Lowest Level Since 1969, was originally published by the American Institute for Economic Research and appears here with permission. Please support their efforts.