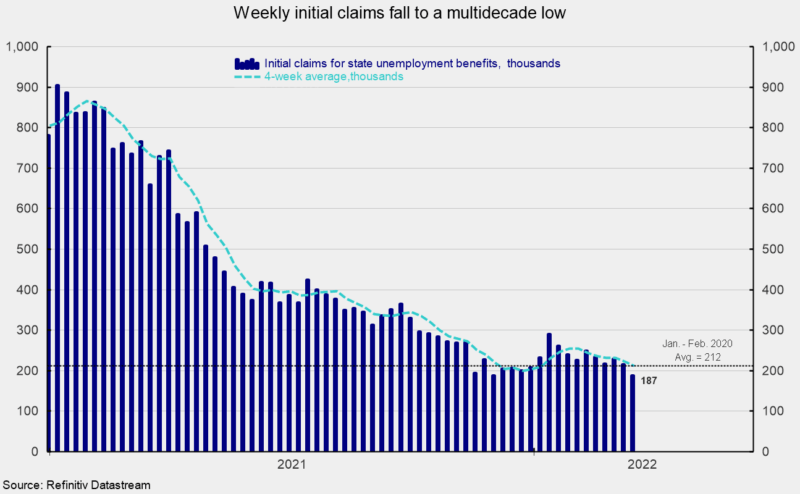 Initial claims for regular state unemployment insurance fell by 28,000 for the week ending March 19, coming in at 187,000, the lowest level since September 6, 1969 (see first chart). Claims had been bouncing around for several weeks but have posted declines in seven of the last nine weeks. The level of claims is now below the January and February average of 212,000 prior to the lockdowns. By long-term historical comparison, initial claims remain very low.

The four-week average also fell in the latest week, posting the sixth drop in the last seven weeks, coming in at 211,750, a drop of 11,500. Weekly initial claims data continue to suggest the labor market remains very tight. However, disruptions to the global economy due to the Russian invasion of Ukraine and the start of a Fed tightening cycle may cause volatility to economic activity in coming months.

The number of ongoing claims for state unemployment programs totaled 1.800 million for the week ending March 5, a drop of 107,916 from the prior week (see second chart). State continuing claims have declined in six of the past eight weeks and have been below their pre-pandemic level of 2.111 million since October 2021 (see second chart).

Continuing claims in all federal programs totaled just 50,020 for the week ending March 5, a drop of 2,833. For January and February 2020, the average for Federal continuing claims was 34,174. Though the current numbers are above the pre-pandemic average, they are just a fraction of the 16.6 million peak and largely reflect the end of the emergency Pandemic Unemployment Assistance program and the Pandemic Emergency UC program.

The latest results for the combined Federal and state programs put the total number of people claiming benefits in all unemployment programs at 1.858 million for the week ended March 5, a decrease of 110,749 from the prior week. The latest result is the fourth week in a row below 2 million.

Despite some volatility at the beginning of the year, initial claims have trended lower in recent weeks and remain at an extremely low level by historical comparison. The overall low level of claims combined with the high number of open jobs suggest the labor market remains very tight. Continuing labor shortages, along with materials shortages and logistical issues, are likely to continue to slow the recovery in production across the economy and sustain upward pressure on prices. In addition, geopolitical and global economic turmoil as a result of the Russian invasion of Ukraine has had a dramatic impact on capital and commodity markets, launching a new wave of disruptions to businesses. Furthermore, the start of a new Fed tightening cycle will likely weigh on economic activity. The outlook remains highly uncertain.

This article, Weekly Initial Claims for Unemployment Benefits Fall to the Lowest Level Since 1969, was originally published by the American Institute for Economic Research and appears here with permission. Please support their efforts.

World War 3: Is The Stage Being Set For The US To Go To War With China And Russia Simultaneously?