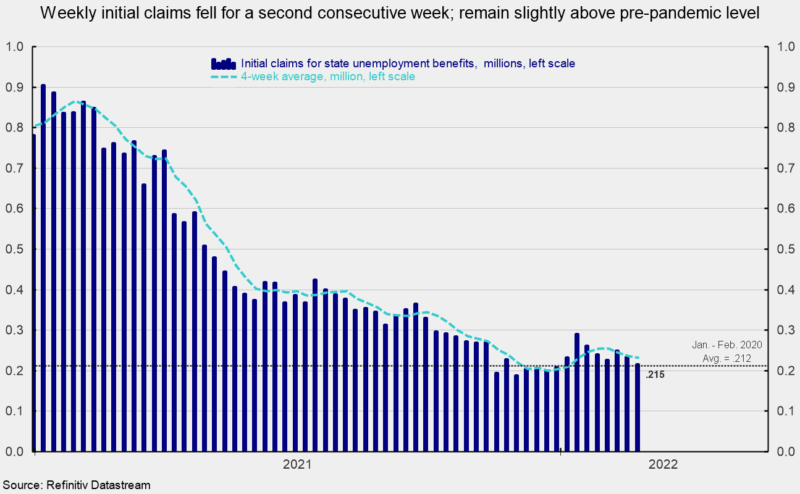 Initial claims for regular state unemployment insurance fell by 18,000 for the week ending February 26, coming in at 215,000 (see first chart). That is the second decrease in a row and is the lowest level since hitting 207,000 for the week ending January 1. Claims are down in five of the last six weeks but remain slightly above the average in early January and February 2020 prior to the pandemic surge. By long-term historical comparison, initial claims remain very low.

The four-week average fell in the latest week, the fourth decrease in a row, coming in at 230,500, a drop of 6,000. Weekly initial claims data continue to suggest the labor market remains very tight.

The number of ongoing claims for state unemployment programs totaled 1.906 million for the week ending February 12, a drop of 60,522 from the prior week (see second chart). State continuing claims have declined for three consecutive weeks and remain below their pre-pandemic level of 2.111 million (see second chart).

Continuing claims in all federal programs totaled just 64,946 for the week ending February 12, a drop of 2,103. For January and February 2020, the average for Federal continuing claims was 34,174. Though the current numbers are above the pre-pandemic average, they are just a fraction of the 16.6 million peak and largely reflect the end of the emergency Pandemic Unemployment Assistance program and the Pandemic Emergency UC program.

The latest results for the combined Federal and state programs put the total number of people claiming benefits in all unemployment programs at 1.971 million for the week ended February 12, a drop of 62,625 from the prior week. The latest result is the first drop below 2 million since the week ending December 25, 2021.

Continuing labor shortages, along with materials shortages and logistical issues, are likely to continue to slow the recovery in production across the economy, though declining new Covid cases should allow businesses to refocus on increasing output and ease some materials shortages and logistical bottlenecks. However, the overall shortage of labor may continue for some time and remain an obstacle to significant increases in output.

Furthermore, geopolitical turmoil as a result of the Russian invasion of Ukraine has had a dramatic impact on capital and commodity markets, launching a new wave of potential disruptions to the global economy and businesses.  The outlook has become highly uncertain.

This article, Weekly Initial Claims for Unemployment Benefits Fall to the Lowest Level of the Year, was originally published by the American Institute for Economic Research and appears here with permission. Please support their efforts.