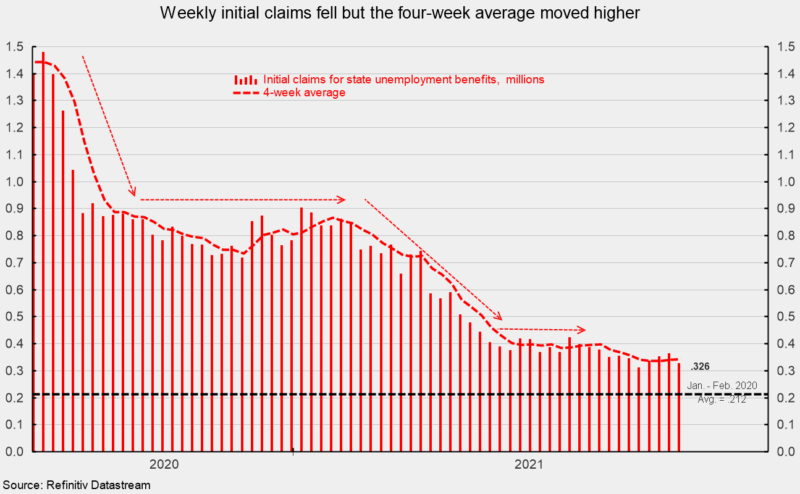 Initial claims for regular state unemployment insurance fell to 326,000 for the week ending October 2, a drop of 38,000 from the previous week’s tally of 364,000 (see first chart). The latest report breaks a string of three consecutive increases that pushed claims to the highest level since August 7.

Despite the drop in the latest week, the four-week average rose for a second consecutive week, rising 3,500 to 344,000, the highest level since August 28. The recent surge in new Covid cases continues to be a setback for some parts of the economy.

The number of ongoing claims for state unemployment programs totaled 2.464 million for the week ending September 18, a drop of 37,260 from the prior week and the fourth decline in the last six weeks (see second chart).

Continuing claims in all federal programs totaled 1.709 million for the week ending September 18, a drop of 817,378 as two Federal emergency programs, Pandemic Unemployment Assistance and Pandemic Emergency Unemployment Compensation, again accounted for most of the drop (see second chart).

The latest results for the combined Federal and state programs put the total number of people claiming benefits in all unemployment programs, including all emergency programs, at 4.173 million for the week ended September 18, a fall of 854,638 from the prior week (see second chart).

The labor market remains tight with the number of open jobs hitting a new record high in July. However, the recent surge in new Covid cases creates uncertainty and likely resulted in some additional layoffs despite the tight market. Businesses and consumers are adapting to the new Covid world, but the waves of new cases will continue to disrupt activity and create uncertainty for the economic outlook.

This article, Weekly Initial Claims for Unemployment Benefits Ease Back After Three Consecutive increases, was originally published by the American Institute for Economic Research and appears here with permission. Please support their efforts.