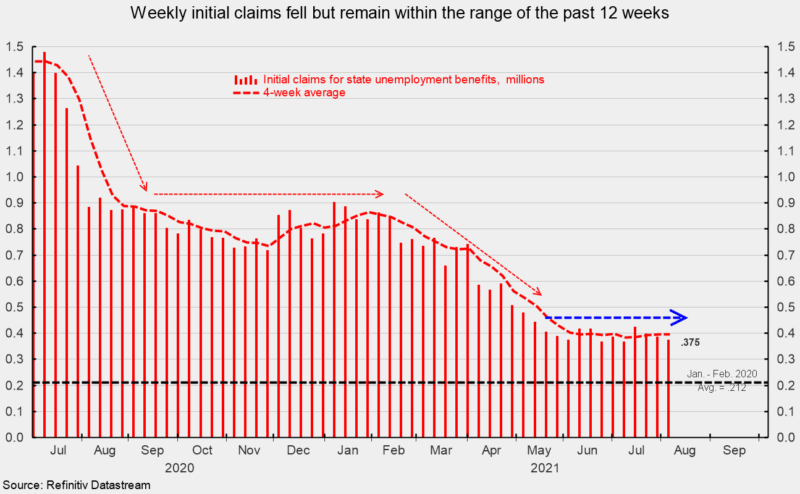 The four-week average rose 1,750 to 396,250, above the 12-week average and the highest since July 3rd. Record numbers of openings continue to be reported across many industries, yet labor force participation remains low, making it difficult to fill the positions. Churn across the labor market remains high as employees quit in record numbers, looking to move to better paying and/or better-quality jobs. However, the Delta variant continues to drive new Covid cases higher and raise uncertainty for many businesses.

The number of ongoing claims for state unemployment programs totaled 2.916 million for the week ending July 24, a drop of 342,689 from the prior week. The latest reading is the 18th consecutive week below 4 million and the first below 3 million since the start of the pandemic (see second chart).

Continuing claims in all federal programs totaled 10.059 million for the week ending July 24, an increase of 342,557, nearly offsetting the drop in state continuing claims. The latest result is the 11th consecutive week that Federal continuing claims have been below the 12 to 16 million range. However, it is also the second increase in the last three weeks (see second chart).

The latest results for the two programs put the total number of people claiming benefits in all unemployment programs, including all emergency programs, at 12.975 million for the week ended July 24, a drop of just 132 from the prior week and the 13th consecutive week below 16 million (see second chart).

This article, Weekly Initial Claims for Unemployment Benefits Continue to Hover Just Under 400,000, was originally published by the American Institute for Economic Research and appears here with permission. Please support their efforts.