Weekly Initial Claims for Unemployment Benefits Are Flattening Out 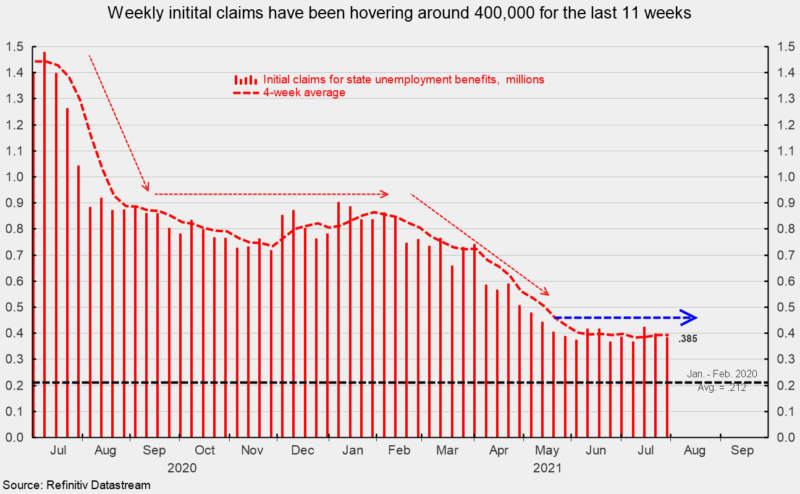 Initial claims for regular state unemployment insurance totaled 385,000 for the week ending July 31, a drop of 14,000 from the previous week’s revised tally of 399,000 (see first chart). Recent data suggest weekly initial claims may be plateauing around the 400,000 level. Over the last 11 weeks, claims have averaged 393,727.

The four-week average fell 250 to 394,000, nearly matching the 11-week average. While labor shortages continue across many industries, labor force participation remains low, making it difficult to fill many positions. However, the Delta variant is driving new Covid cases higher and raising uncertainty for many businesses.

The number of ongoing claims for state unemployment programs totaled 3.259 million for the week ending July 10, a rise of 133,196 from the prior week and the third increase in the last eight weeks. The latest reading is the 16th consecutive week below 4 million (see second chart). However, the average decline over that period is just 25,367.

Continuing claims in all federal programs totaled 9.897 million for the week ending July 10, an increase of 449,207. The latest result is the ninth consecutive week that Federal continuing claims have been below the 12 to 16 million range and the second week below 10 million since the initial surge in claims. However, it is also the second increase in the last six weeks and the largest increase since the week ending April 24th (see second chart).

The latest results for the two programs put the total number of people claiming benefits in all unemployment programs, including all emergency programs, at 13.156 million for the week ended July 10, a gain of 582,403 from the prior week and the first increase since April 24th. However, it is the eleventh consecutive week below 16 million (see second chart).

This article, Weekly Initial Claims for Unemployment Benefits Are Flattening Out, was originally published by the American Institute for Economic Research and appears here with permission. Please support their efforts.