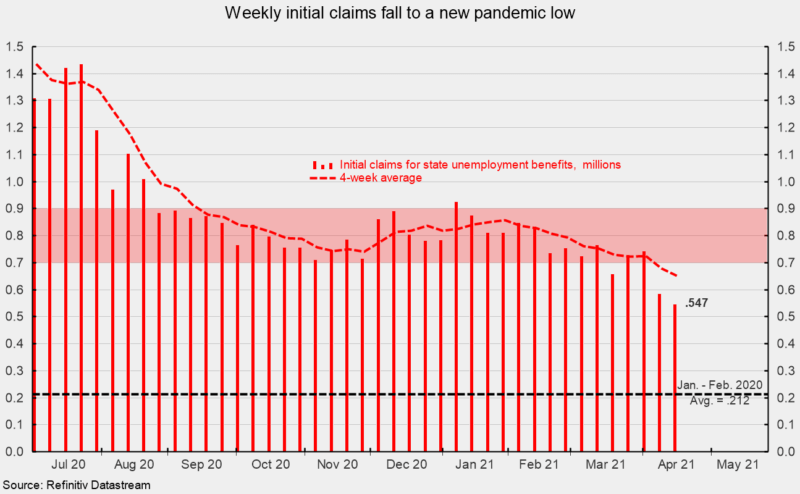 Initial claims for regular state unemployment insurance totaled 547,000 for the week ending April 17, a drop of 39,000 from the previous week’s upwardly revised tally of 586,000 (see first chart). The current result is the lowest level since March 14, 2020 and supports an improving outlook for the labor market and overall economy.

The four-week average fell 27,750 to 651,000, the second consecutive week below 700,000 and first back-to-back results below that level since March 14, 2020. Initial claims are likely to continue trending lower as the combination of vaccine distribution and easing government restrictions on consumers and businesses slowly push the economy closer to normal operation. However, significant damage has been done by the lockdowns and full recovery is likely some time away.

The number of ongoing claims for state unemployment programs totaled 3.886 million for the week ending April 3, down 101,484 from the prior week. The latest reading is the second consecutive week below 4 million and the lowest since the lockdowns began in March 2020 (see second chart).

The total number of people claiming benefits in all unemployment programs including all emergency programs was 17.045 million for the week ended April 3, up 491,674 from the prior week. Total claims have been in the 16 to 20 million range since November (see second chart).