We Have Never Been More Vulnerable, And The Stage Has Now Been Set For A Complete And Total Economic Collapse 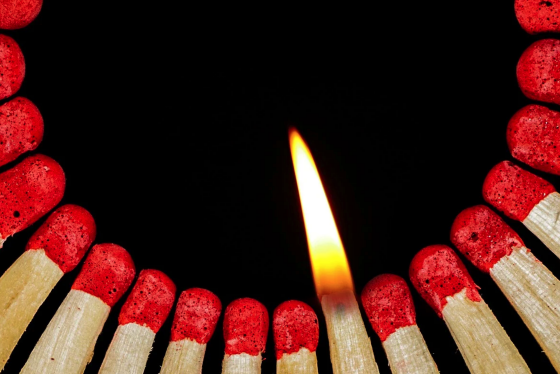 Teetering on a precipice can seem exciting until something comes along that knocks you over the edge.  Unfortunately, the events of the past couple of years have perfectly set the stage for a global economic collapse of unprecedented size and scope.  Inflation is out of control all over the planet, the worst global supply chain crisis since World War II continues to get worse with each passing day, and the vast majority of the global population is just barely scraping by from month to month.  In other words, we have never been more vulnerable than we are right now.

Even in the United States, a shockingly high percentage of the population literally lives on the brink of financial disaster.  According to a brand new survey that was just released, seven out of every ten Americans are currently living paycheck to paycheck…

In these tough financial times, a new study finds it’s getting harder and harder for people to save any of their money. In fact, seven in 10 Americans say they’re living paycheck to paycheck.

A recent survey of 2,007 adults found that 63 percent don’t see themselves reaching a level of financial security that will allow them to live the lifestyle they want.

Most people do not have a sizable financial cushion to fall back on.

And even though our leaders in Washington have absolutely flooded the system with new money over the past two years, more than two-thirds of the country is living paycheck to paycheck.

As bad as things have been, it is only a matter of time before another major crisis of some sort comes along.

In fact, the head commodity strategist for Goldman Sachs just publicly admitted that the world is now facing shortages of virtually all major commodities…

In a time when social networks have been swamped with photos of empty shelves from across the nation, Goldman’s head commodity strategist and one of the closest-followed analysts on Wall Street, said he’s never seen commodity markets pricing in the shortages they are right now.

“I’ve been doing this 30 years and I’ve never seen markets like this,” Currie told Bloomberg TV in an interview on Monday. “This is a molecule crisis. We’re out of everything, I don’t care if it’s oil, gas, coal, copper, aluminum, you name it we’re out of it.”

This is a really big deal.

You may not realize it yet, but this isn’t just a temporary global supply chain crisis.

This is the beginning of a global supply chain collapse.

All over the planet, way too much money is chasing way too few goods and services.

This is driving up prices at a staggering pace, and we continue to get more troubling news with each passing day.

For example, even though meat prices have already gone up very aggressively, Tyson Foods just announced that it will be raising prices yet again…

Stock of Tyson Foods, the world’s second largest processor and marketer of chicken, beef, and pork after Brazil’s JBS S.A., is soaring 9%, hitting an all time high and is one of the S&P’s best companies this morning…

… after the company reported blowout earnings (thanks to passing on surging food prices) and announced that it is raising prices even more as it grapples with a tight labor market and smaller livestock herds. According to the report, beef prices jumped by 32% in the quarter, with chicken up ~20% and pork 13%.

Of course similar things are happening in other industrialized nations all over the globe.

One British news sources is telling us that the economy in Germany “is in freefall” and that “devastating” price hikes are causing a tremendous amount of pain for consumers over there.

Needless to say, a lot of people can see what is coming and they are taking steps to get prepared.

Earlier today, I came across a Wall Street Journal article that lamented the fact that so many Americans are engaged in “hoarding”…

Alexis Abell recently walked out of a BJ’s Wholesale Club outside Buffalo, N.Y., with 24 boxes of Kraft Macaroni & Cheese, a box of 50 frozen mozzarella sticks, a 40-pound bag of basmati rice and a 12-can pack of garbanzo beans.

“I don’t want to be in a position again where I can’t get something,” says Ms. Abell, a 41-year-old mother of five, who was laid off from her retail job at a quilt shop in 2020 and decided not to return to work.

I don’t call this “hoarding” at all.

I call it being smart.

The stupid people are those that expect the government to bail them out when everything starts hitting the fan.

As I have discussed previously, the federal government has a very limited amount of food, water and generators at eight widely scattered FEMA distribution centers around the country.

Other than that, the federal government purchases a very small amount of food that it distributes through foreign aid programs.

In the event of a major national emergency, the government’s meager supplies will be totally gone almost immediately.

Then you will be on your own.

The elite realize that global food supplies are only going to get tighter, and so they have been preparing for a time when bug protein will make up a significant chunk of our diets.

We are rapidly moving into a time when normal people won’t be able to afford to eat meat on a regular basis.

Once that day arrives, where will you get your protein?

Our world is changing at a pace that is absolutely breathtaking, but most people still want to believe that everything will go back to “normal” eventually.

McDonald’s: A Golden Stock Worth A Premium