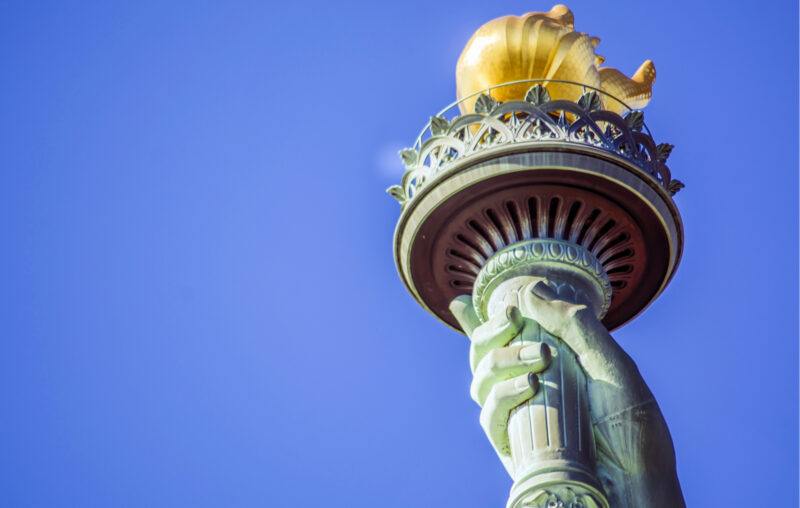 Decades before Gene Roddenberry launched the U.S.S. Enterprise, Yevgeny Zamyatin imagined the maiden voyage of INTEGRAL, a spaceship designed to carry the odes and treatises written in honor of OneState by its people (“Numbers”). The goal, as the state newspaper tells readers, is to prepare new worlds for their coming bliss:

It is for you to place the beneficial yoke of reason round the necks of the unknown beings who inhabit other planets—still living, it may be, in the primitive state known as freedom. If they will not understand that we are bringing them a mathematically infallible happiness, we shall be obliged to force them to be happy. But before taking up arms, we shall try what words can do.

So begins the dystopian novel We, which Zamyatin finished and attempted to publish in 1921.

Zamyatin was no friend of oppression in any form, and he paid the price. As Kingsley Widmer observes in “Utopia and Liberty,” he “had the political good taste to be persecuted by both the Czarists and the Bolsheviks.”

The latter appreciated neither the satire of the novel’s opening nor the irony of suppressing a book about the suppression of freedom. Then again, the Soviet famine of 1921-22 would have starved away anyone’s sense of humor. We was reputedly the first book banned by the Soviet censorship board.

Analyzing We for EconLog, Alberto Mingardi observes that OneState’s “managerial obsession” is typical of a mindset described by F.A. Hayek: that of the man who wishes to turn the world into a machine that he controls. As Mingardi asserts, “Behind totalitarian politics lurks a devastating contempt for liberty.”

At its centennial, We remains a powerful defense of freedom that gives literary form to John Stuart Mill’s arguments in On Liberty (1859). As Mill insists in Chapter III,

In relation to speech, originality, and action, Zamyatin’s novel shows the devastating cost of eliminating individual freedom: the loss of self.

The Appeal of “Ideal Nonfreedom”

The narrator of We, D-503, is the Builder of the INTEGRAL and excited to add to the mail packet by writing “What I see, what I think—or, to be more exact, what we think (that’s right: we; and let this WE be the title of these records).” He and the other Numbers exemplify the conformity Mill analyzes in On Liberty:

It does not occur to them to have any inclination except for what is customary. Thus the mind itself is bowed to the yoke: even in what people do for pleasure, conformity is the first thing thought of; they like in crowds; they exercise choice only among things commonly done; peculiarity of taste, eccentricity of conduct are shunned equally with crimes, until by dint of not following their own nature they have no nature to follow….

D-503 wants to spread the yoke around. He shares the glory of being part of the whole, one of many Numbers who live in a city of glass: “Every morning… at the very same hour and the very same minute, we get up, millions of us, as though we were one.” He extols the aesthetic order brought by this “nonfreedom,” the beauty of afternoon walks taken by thousands wearing the same blue uniform, marching four abreast.

Yet, D-503’s ideal is Mill’s nightmare: “A man cannot get a coat or a pair of boots to fit him unless they are either made to his measure or he has a whole warehouse to choose from; and is it easier to fit him with a life than with a coat?”

D-503 thinks so, especially since he fears the condition in which previous people lived: “In freedom—that is, in disorganized wildness.” They even mated at random. How could the government have allowed people to act like animals? After all, “freedom and criminality are…indissolubly linked.”

But above all, he admires the drive to eliminate envy by making everyone equal. Hunger and love no longer rule the world, since everyone shares an abundance of petroleum food, and “any Number has the right of access to any other Number as a sexual product.”

The Progress of the Machine

Well, almost everything. Occasionally a Number rebels, and D-503 hears “a wild, ape-like echo.” But these are “chance details:” “it’s easy to repair them without bringing to a halt the great eternal progress of the whole Machine. And in order to discard some bolt that has gotten bent, we have the heavy, skillful hand of the Benefactor, we have the experienced eye of the Guardians.”

That is, they have spies who find rebels and a ruler who executes them.

Such executions are practically religious rites. Awestruck, D-503 records the beauty of the ceremony as well as the death of a man who wrote “a blasphemous poem, one in which the Benefactor is called… but no, I can’t make my hand write it.” To do so would be to acknowledge other possibilities, other perspectives.

And suppressing freedom of expression is as necessary for totalitarianism as sharing opinions is for liberty. In Chapter II of On Liberty, Mill identifies four reasons why:

For Mill, the right to free speech was essential. The Benefactor of OneState disagrees, as do some intellectuals now who believe that Mill was “wrong” in his “free-speech absolutism.” Yet without free speech, how is the truth to be recognized?

For the revolutionaries in OneState, the first step is introducing the Builder of the Integral (D-503) to individualism, a trait emphasized by Mill in Chapter III of On Liberty: “It is not by wearing down into uniformity all that is individual in themselves, but cultivating it and calling it forth, within the limits imposed by the rights and interests of others, that human beings become a noble and beautiful object of contemplation.”

I-330 is such an object. Bold and brilliant, she invites D-503 to an excursion at a museum, the “Ancient House,” sited next to the Green Wall dividing OneState from the wilderness. When she changes her uniform for a yellow silk dress and black stockings, D-503 sputters, “It’s clear that you want to show off your originality.”

“It’s clear,” I-330 responds, “that to be original means to distinguish yourself from others. It follows that to be original is to violate the principle of equality.” Such originality threatens the foundations of a society built on sameness, pointing toward the possibilities of individuals developing themselves and society.

And if such individuals “are of a strong character and break their fetters,” Mill notes, they are marked by society as “wild.” Yet these figures have much to offer skeptics, including the service “of opening their eyes: which being once fully done, they would have a chance of being themselves.”

This is precisely what frightens D-503. He flees not only from the temptation to indulge in a liaison or to look beyond the Wall. He runs from what he glimpses in I-330’s eyes: “My own reflection. But it was not natural and it did not look like me.”

Denying this vision, D-503 struggles to resume his role as a mere Number. He fails to report I-330’s behavior to the Bureau of Guardians. He dreams, which OneState considers a sign of mental illness. And he seethes when assigned sexually to I-330, who boldly smokes cigarettes and savors a “charming liqueur.”

Provoked, D-503 resorts to quoting the law against poison. I-330 calmly continues his point: “To destroy a few quickly makes more sense than to allow the many to ruin themselves, to degenerate, etc., etc. That is indecently true.”

But she shows as much disdain for this social control as Mill, who insists in his introductory chapter, “[t]he only purpose for which power can be rightfully exercised over any member of a civilized community, against his will, is to prevent harm to others. His own good, either physical or moral, is not a sufficient warrant.”

In this case, D-503 believes such control is right even as he swallows the “burning poison” that sharpens his vision:

There were two me’s. One me was the old one, D-503, Number D-503, and the other…. The other used to just stick his hairy paws out of his shell, but now all of him came out, the shell burst open, and the pieces were just about to fly in all directions… and then what?

Like Eve tempted by the serpent, D-503 has acquired desire and forbidden knowledge of himself.

“Just one:” Imagination and Desire

Most importantly, D-503 admits that he has an imagination, a trait that OneState identifies as “illness.” And for a time, D-503 doesn’t want to get well. Going with I-330 beyond the Wall, D-503 meets a different people living in freedom and discovers his own individuality: “I was… myself, something separate, a world; I stopped being one of many, the way I’d always been, and became just one.”

As Mill explains, in developing individuality, “[e]ach person becomes more valuable to himself, and is, therefore, capable of being more valuable to others.” And so D-503 joins the revolution, helping I-330 and the rebels take control of the Integral at its first test.

OneState’s Guardians halt them, and the state crushes the rebellion by demanding that all Numbers report for surgery. Doctors “cure” people of imagination—the “last barrier on the path to happiness”—by subjecting its center in the brain to three doses of X-rays.

Zamyatin clarifies what is at stake when I-330 resists surgery, telling D-503, “What difference is it to you if I don’t want others to do the wanting for me? If I want to want for myself? If I want the impossible?” As Mill argues, humans gain most by allowing others to live as seems best to themselves.

In fact, Mill concludes On Liberty by warning statesmen against excessive control:

a State which dwarfs its men, in order that they may be more docile instruments in its hands even for beneficial purposes—will find that with small men no great thing can really be accomplished; and that the perfection of machinery to which it has sacrificed everything will in the end avail it of nothing, for want of the vital power which… it has preferred to banish.

Zamyatin does not depict the fate of OneState, though he does present sad ends for D-503, whose imagination is removed, and I-330, who is tortured and slated for execution.

Yet Zamyatin leaves readers with hope, as valuable now as it was in 1921. As I-330 says, there is no final number, so “how can there be a final revolution? There is no final one. The number of revolutions is infinite.” Even when liberty seems most at risk, it is never truly lost.

This article, We at 100: The Case for Liberty, was originally published by the American Institute for Economic Research and appears here with permission. Please support their efforts.

The Moneyist: ‘And then 2022 happened’: I borrowed $500,000 from friends and family to invest in the stock market, foolishly promising a 10% return. Can I avoid legal action?

The Mess of an Address