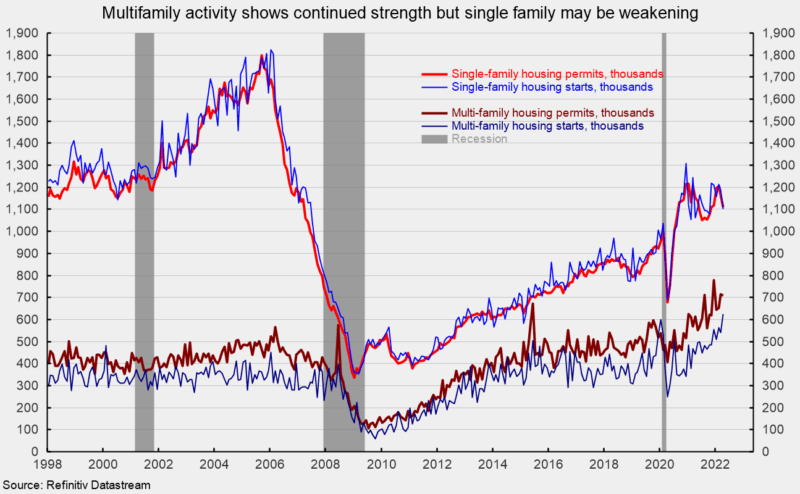 Meanwhile, the National Association of Home Builders’ Housing Market Index, a measure of homebuilder sentiment, fell again in April, coming in at 69 versus 79 in April, and down sharply from recent highs of 84 in December 2021 and 90 in November 2020. Rising mortgage rates, elevated home prices, and higher input costs are major concerns (see second chart).

Input costs are a concern for builders. Key input materials costs are down from peaks but still elevated with lumber coming in at around $780 per 1,000 board feet in mid-May, down from peaks around $1,700 in May 2021 and $1,500 in early March 2022 while copper was down slightly at $9,400 per metric ton (see third chart). The high input costs will pressure profits at builders and may lead to more price increases for new homes (see fourth chart).

Furthermore, mortgage rates have rocketed higher recently, with the rate on a 30-year fixed rate mortgage coming in at 5.30 percent in mid-May, nearly double the lows in early 2021 while home prices are at record-high levels (see fourth chart). Higher home prices and higher mortgage rates are likely to be significant headwinds for future housing activity.

While the implementation of permanent remote working arrangements for some employees may be providing continued support for housing demand, record-high home prices combined with the surge in mortgage rates will likely work to cool activity in coming months. Threats to future demand combined with elevated input costs are sending homebuilder sentiment plunging. The outlook for housing, especially the single-family segment, is deteriorating rapidly.

This article, Warning Flags for Home Construction, was originally published by the American Institute for Economic Research and appears here with permission. Please support their efforts.