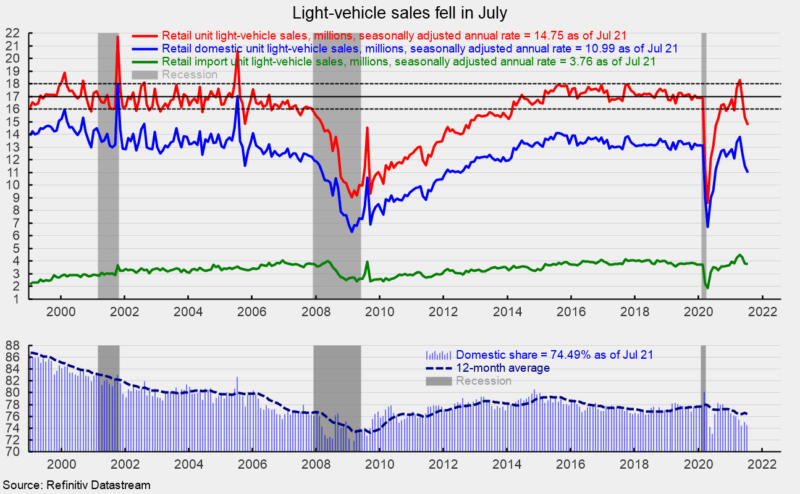 Sales of light vehicles totaled 14.8 million at an annual rate in July, down from a 15.4 million pace in June. The July decline was the second consecutive month below the 16 to 18 million range and the slowest pace since the recovery from the lockdown-induced plunge in 2020 (see top of first chart). Unit sales plunged in March and April 2020 to 11.2 million and 8.6 million annual rates, respectively. The pace of sales in April 2020 was the lowest on record since this data series began in 1976 and follows a run of 72 months in the 16 to 18 million range from March 2014 through February 2020.

A computer chip shortage has disrupted production for many manufacturers, creating a scarcity for many models, leading to lower inventory and higher prices. Both factors may have contributed to the slower sales pace in July. The lack of chips is showing some signs of easing, but it may take some time for conditions to return to normal.

This article, Unit Auto Sales Fell in July as Inventories Plunge and Prices Jump, was originally published by the American Institute for Economic Research and appears here with permission. Please support their efforts.

Intuitive Surgical Stock To Bounce Back After A 3% Fall In A Week?

California Voters Get What They Deserve